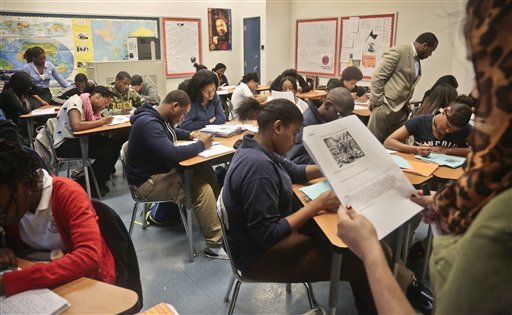 In 1973, the U.S. Supreme Court ruled that a law that allowed the state to reimburse private religious schools for costs associated with testing violated the establishment clause of the First Amendment (separation of church and state). In this photo, students take a test in a New York public high school in 2013. (AP Photo/Bebeto Matthews, used with permission of the Associated Press)

In Levitt v. Committee for Public Education and Religious Liberty, 413 U.S. 472 (1973), the Supreme Court held that lump-sum payments by a state government to religious schools for administrative costs violate the establishment clause of the First Amendment.

The case was a companion to Committee for Public Education and Religious Liberty v. Nyquist (1973), in which the Court held that a state statute providing monetary grants to religious schools for the maintenance and repair of school facilities violated the establishment clause.

The New York Legislature, under comptroller Levitt and Commissioner of Education Nyquist, appropriated $28 million dollars to reimburse private schools for expenses the schools might incur for testing and other administrative tasks.

The funds were specifically intended to reimburse private schools for performing services the state mandated. For example, the statute provided funds for private schools to administer standardized tests. Nyquist interpreted the statute to include religious schools as potential beneficiaries of the funds.

Writing for the Court, Chief Justice Warren E. Burger explained that the establishment clause of the First Amendment bars reimbursement of religious schools for administrative costs.

The statute’s provision of funds for testing, for example, made no attempt to “assure that internally prepared tests are free of religious instruction.” Although providing funds for textbooks and state-prepared tests may be constitutionally permissible, Chief Justice Burger explained, teacher-produced tests (which are prevalent in nonpublic schools) were suspect because a teacher’s handling of the subjects that textbooks introduce cannot reliably be controlled.

Because there is a “substantial risk that these examinations, prepared by teachers under the authority of religious institutions, will be drafted with an eye, unconsciously or otherwise, to inculcate students in the religious precepts of the sponsoring church,” the use of public funds to administer those examinations constituted impermissible aid to religion.

Justice Byron R. White, the only dissenter, did not file an opinion.