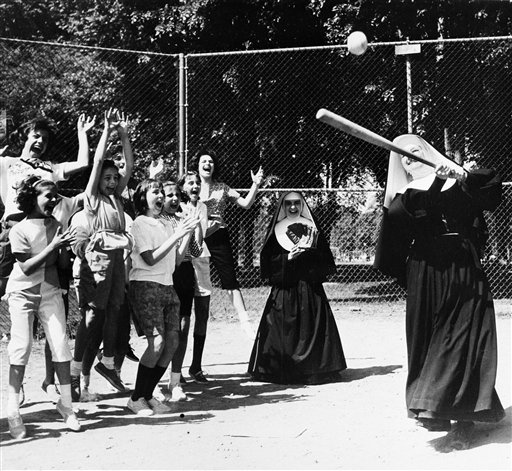 The Supreme Court decision in New York v. Cathedral Academy, 434 U.S. 125 (1977), invalidated a New York law adopted to reimburse parochial schools for state-mandated recordkeeping and testing services, finding it in violation of the First and Fourteenth Amendments because it required excessive state involvement in religious affairs. In this photo, Sister Colette of St. Anthony of Padua School, hits a single in a softball game during the annual school picnic, May 22, 1962, in Utica, N.Y. Sister Maura, the catcher, seems to approve along with the cheering section. (AP Photo, used with permission from the Associated Press)

The Supreme Court decision in New York v. Cathedral Academy, 434 U.S. 125 (1977), invalidated a New York law adopted to reimburse parochial schools for state-mandated recordkeeping and testing services, finding it in violation of the First and Fourteenth Amendments because it required excessive state involvement in religious affairs.

A three-judge U.S. district court had previously prohibited such reimbursement, and the Supreme Court had affirmed this decision in Levitt v. Committee for Public Education and Religious Liberty (1973). The New York legislature, recognizing what it considered to be a “moral obligation” to make such payments, adopted another law doing so, and a decision by the New York Court of Appeals had upheld it.

Justice Potter Stewart’s opinion for the Court said that the case was controlled by Lemon v. Kurtzman (Lemon II) (1973). In that case, it had permitted the state to give payments to parochial schools performed prior to its decision in Lemon v. Kurtzman (Lemon I) (1971), which had declared that such payments violated the First Amendment. In Lemon II, it reasoned that because payments were for expenses already incurred, they posed no threat of continuing excessive entanglement. In this case, however, the law as interpreted by lower courts would have permitted payments for amounts “heretofore or hereafter expended” and would require impermissible state oversight. In such circumstances, the aid would either have the “primary effect of aiding religion,” or it would “result in excessive state involvement in religious affairs.” Lemon II had recognized that “excessive entanglement was an accomplished fact that could not be undone by enjoining payments for expenses previously incurred.” By contrast, the majority thought that the law at issue here “amounts to a new and independently significant infringement of the First and Fourteenth Amendments.”

Chief Justice Warren E. Burger and Justice William H. Rehnquist dissented, saying they would have upheld the reimbursements on the basis of Lemon II. Justice Byron R. White also dissented, writing that the Court continued “to misconstrue the First Amendment in a manner that discriminates against religions and is contrary to the fundamental educational needs of the country.”