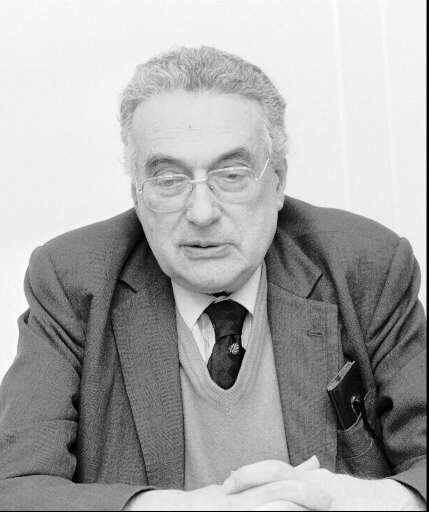 A 1987 file picture of Marxist economist Ernest Mandel, professor at the Brussels Free University (VUB). Mandel was denied a visa for his advocacy of Communism. The attorney general also turned down his waiver. In Kleindienst v. Mandel, 408 U.S. 753 (1972), the Supreme Court, in a 6-3 vote, held that the attorney general of the United States did not violate Mandel's freedom of speech by denying him entry into the country to attend academic meetings. First Amendment protections did not extend to noncitizens. (AP Photo, used with permission from the Associated Press)

In Kleindienst v. Mandel, 408 U.S. 753 (1972), the Supreme Court, in a 6-3 vote, held that the attorney general of the United States did not violate a foreign journalist’s freedom of speech by denying him entry into the country to attend academic meetings. Writing for the majority, Justice Harry A. Blackmun ruled that the government had the right to decide whether an alien was allowed in the country on subsequent academic trips even if an American professor had invited him. First Amendment protections did not extend to noncitizens.

Ernest Mandel, a revolutionary Marxist from Belgium, was invited to speak at several U.S. colleges — at one on the topic of “Revolutionary Strategy in Imperialist Countries” — but his advocacy of Communism made him ineligible for a visa under the Immigration and Nationality Act. Although his ineligibility was subject to waiver, Attorney General Richard G. Kleindienst denied the waiver because Mandel had abused his opportunities during his last visit to the United States. Several American professors and Mandel sued the attorney general for violating Mandel’s First Amendment right to engage in free academic speech.

Court found that the government had the right to exclude aliens

Although the Court recognized that the First Amendment implicated the rights of U.S. citizens to “receive information and ideas,” it found that such rights in this case had to give way to the plenary powers that Congress had to exclude aliens, and which it had delegated to the President. The decision is consistent with the opinion in the Chinese Exclusion Case (1889) in which the Court had ruled that Congress had the right to control immigration as an inherent aspect of U.S. sovereignty. The Court has issued similar rulings related to First Amendment rights in United States ex rel. Turner v.Williams (1904), Knauff v. Shaughnessy (1950), Harisiades v. Shaughnessy (1952) and Trump v. Hawaii (2018).