By Elizabeth R. Purdy
Related cases in Petition, Right to, Libel and Slander 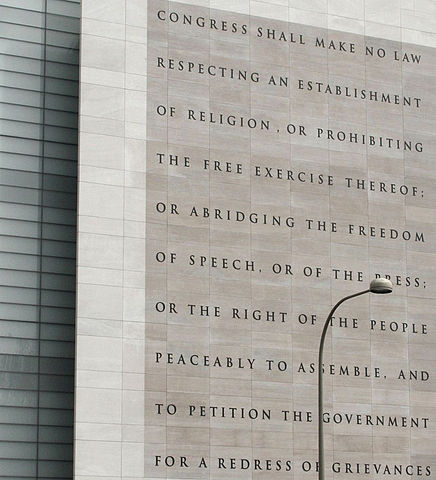 The First Amendment guarantees five freedoms shown here on the Newseum in Washington, D.C. McDonald v. Smith (1985) dealt with two of these freedoms: freedom of speecha and the right to petition the government for a redress of grievances. The Court held that the petition clause of the First Amendment, which guarantees Americans the right to petition the government for redress of grievances, does not endow individuals with absolute immunity from charges of slander and libel. (Image via David on Flickr, CC BY 2.0)

In one of its few pure petition cases, the Supreme Court held in the 8-0 decision in McDonald v. Smith, 472 U.S. 279 (1985), that the petition clause of the First Amendment, which guarantees Americans the right to petition the government for redress of grievances, does not endow individuals with absolute immunity from charges of slander and libel.

McDonald used false information to protest the appointment of a judge

The case arose from a dispute in which Robert McDonald, a Virginia businessman, wrote two letters to President Ronald Reagan, with copies directed to other government officials, to protest the appointment of Judge David Smith as United States attorney to the Middle District of North Carolina.

In the letters to the President, McDonald accused Smith of violating the civil rights of several individuals who appeared before him as a sitting judge of the North Carolina Superior Court. He also accused Smith of fraud, conspiracy to commit fraud, extortion, blackmail, and unprofessional conduct.

Smith contended that the letters contained “false, slanderous, libelous, inflammatory and derogatory statements” and insisted that McDonald knew the charges were not based on fact. Nevertheless, Smith lost the appointment in question.

McDonald claimed that his right to redress of grievances as protected by the First Amendment rendered him immune to charges of slander and libel from Judge Smith, who had demanded both compensatory and punitive damages amounting to $1 million. Because the case involved citizens of different states, it was channeled to the federal court system.

Both the district and appeals courts denied that the right to redress of grievances granted absolute immunity from defamatory statements about government officials. In its affirmation of the lower court decisions, the Supreme Court referred to its 1845 holding in White v. Nicholls, which stipulated that the “express malice” needed to prove slander or libel was defined according to whether the accused had lied without probable cause.

Generally, defamation cases heard by the Court deal with statements appearing in the media, and issues of slander and libel are complicated by the Court’s adherence to the First Amendment’s protection of a free press. Conversely, McDonald v. Smith dealt with privately written alleged defamations of a government official by a private citizen. Rather than dealing with the traditional issue of whether public officials were protected from defamatory statements by the First Amendment, an issue covered in Rosenblatt v. Baer (1966), in McDonald v. Smith the Court dealt only with the narrow question of possible immunity granted by the petition clause.

Although acknowledging the importance of the petition clause as expressed in United States v. Cruikshank (1876), the Court expressed its reluctance to elevate the petition clause to the “strict scrutiny” evaluation to which alleged violations of the First Amendment’s protections of speech, press, and religion are generally exposed.

Instead, the Court upheld the position articulated in the landmark slander/libel case New York Times Co. v. Sullivan (1964). In Sullivan, the Court contended that defamation of government officials exists only when the statement in question is made with “knowledge of its falsity or with reckless disregard of whether it was true or false.”