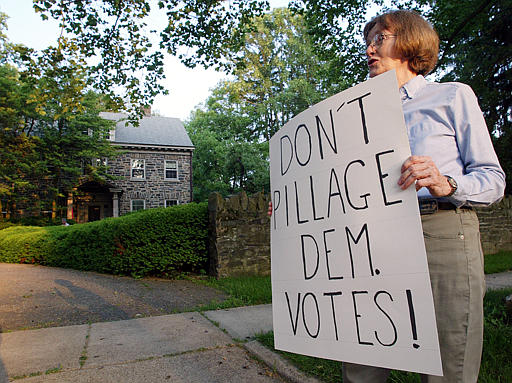 Residential picketing was at issue in an Illinois statute that barred such picketing unless it was peaceful and in front of a home that doubled as a place of employment. The Supreme Court struck down the law as unconstitutional, saying it was a "content-based restriction" that violated free speech protected in the First Amendment. However, they left the door open to some forms of regulation against residential picketing. (In this photo, a woman pickets outside a residence in New Jersey where Independent presidential candidate Ralph Nader made a visit to raise money and talk politics in May 23, 2004, AP Photo by Tim Larsen, reprinted with permission from The Associated Press.)

The Supreme Court in Carey v. Brown, 447 U.S. 455 (1980) struck down an Illinois statute barring picketing of residences, except in cases of peaceful picketing of homes doubling as places of employment.

The majority concluded that the regulation was an “impermissible content-based restriction on protected expression,” similar to the one invalidated in Police Department of Chicago v. Mosley (1972). Writing for the Court, Justice William J. Brennan Jr. also noted that the Illinois law violated the equal protection clause of the Fourteenth Amendment.

According to the Court, once a state opens a forum “to assembly or speaking by some groups, government may not prohibit others from assembling or speaking on the basis of what they intend to say.”

Opinion leaves room for some regulation of residential picketing

Illinois attempted to distinguish the case from Mosley by arguing that the statute helped ensure privacy in the home, but Brennan saw no reason to exempt labor from picketing in such circumstances since picketing over labor issues was no more deserving than other forms of speech. Brennan noted that, nonetheless, the decision did not mean “that residential picketing is beyond the reach of uniform and nondiscriminatory regulation.”

In a concurring opinion, Justice Potter Stewart indicated that he thought the case centered on the protection of free speech rather than on equal protection.

Justice William H. Rehnquist wrote a dissenting opinion, joined by Chief Justice Warren E. Burger and Justice Harry A. Blackmun, arguing that the Court had misread the statute, which he interpreted as permitting four types of peaceful picketing of residences and allowing far more speech than would an absolute ban.

He concluded that the majority decision “can only mean that the hymns of praise in prior opinions celebrating carefully drawn statutes are no more than sympathetic clucking, and in fact the State is damned if it does and damned if it doesn’t.”

He considered the state regulations to be reasonable “time, place, and manner” restrictions protecting residential privacy, which he viewed as “a substantial governmental interest unrelated to the suppression of free expression.” He further argued, “Content regulation, when closely related to a permissible state purpose, is clearly permitted.”

He ended by quoting Justice Felix Frankfurter’s concurring opinion in Kovacs v. Cooper (1949), observing, “[It] is not for us to supervise the limits the legislature may impose in safeguarding the steadily narrowing opportunities for serenity and reflection.”