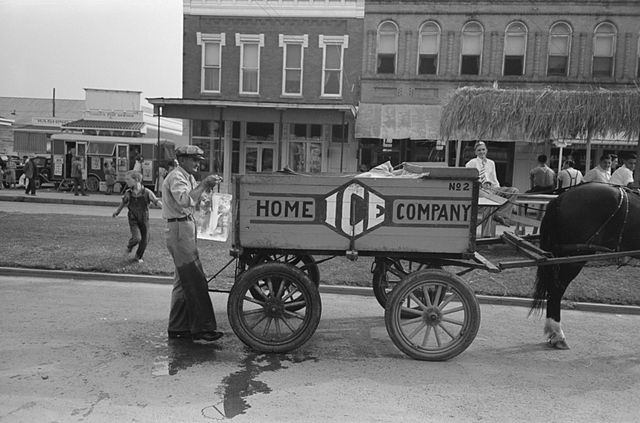 An iceman delivers ice to the National Rice Festival in Crowley, Louisiana, 1938. In 1949, the Supreme Court decision in Giboney v. Empire Storage and Ice Co. upheld an injunction against peaceful picketing by an ice peddlers’ union in Missouri. The peddlers attempted to force an ice company to break a state restraint of trade law. The court argued that First Amendment freedoms do not protect conduct such as picketing that breaks valid laws.

The Supreme Court decision in Giboney v. Empire Storage and Ice Co., 336 U.S. 490 (1949) upheld an injunction against peaceful picketing that a lower court had issued to members of a union in Kansas City, Missouri.

The union members had picketed a business that had continued to sell ice to nonunion ice peddlers. The pickets had reduced the company’s business by 85 percent, but had the business refused to sell to nonunion businesses, it could have been subject to triple damages under state laws prohibiting restraint of trade.

Writing for the unanimous Court, Justice Hugo L. Black recognized that states had the power to restrict businesses from restraining trade, but also argued that the pickets' conduct was not immunized simply because it involved the exercise of peaceful First Amendment freedoms. He observed that the pickets could not be treated in isolation but with the recognition that their purpose was “to compel Empire to agree to stop selling ice to nonunion peddlers.”

Black further observed, “It rarely has been suggested that the constitutional freedom for speech and press extends its immunity to speech or writing used as an integral part of conduct in violation of a valid criminal statute.”

He also attempted to square this ruling with earlier decisions relative to picketing in Thornhill v. Alabama (1940) and Carlson v. California (1940). Although Black agreed that the unions were attempting to influence the conduct of Empire in part through speaking and writing, he argued that “it has never been deemed an abridgment of freedom of speech or press to make a course of conduct illegal merely because the conduct was in part initiated, evidenced or carried out by means of language, either spoken, written, or printed.”

Black believed Missouri had the right to decide on the wisdom of legislation against restraint of trade, and the courts should enforce it.