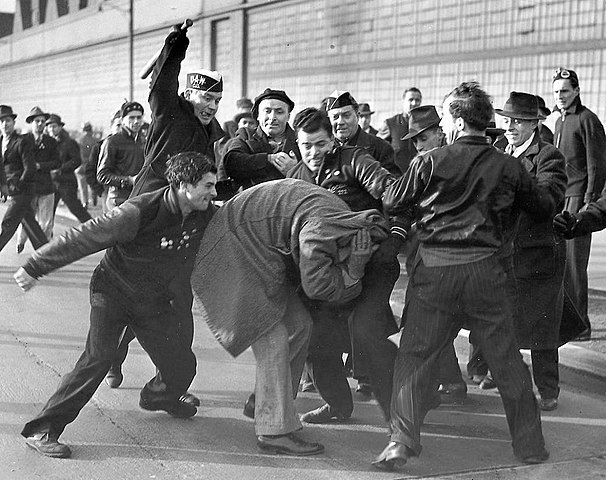 Hotel and Restaurant Employees’ International Alliance v. Wisconsin Employment Relations Board (1942) involved violence in a Wisconsin labor strike like the violence shown here in a 1941 Michigan strike. The Supreme Court upheld an injunction against violent picketing and said only peaceful picketing is protected by the First Amendment. (Image via Wikimedia Commons, public domain)

In Hotel and Restaurant Employees’ International Alliance v. Wisconsin Employment Relations Board, 215 U.S. 437 (1942), the Supreme Court upheld an injunction under Wisconsin’s Employment Peace Act of 1939 against picketing that had been issued and upheld by state courts. The Court decided that the injunction did not violate First and Fourteenth Amendment protections of freedom of speech. It reached this decision on the basis of the interpretation by the Wisconsin Supreme Court that limited the actual application of an otherwise broadly worded injunction only to violent picketing.

Employees of two hotels in Wisconsin had gone on strike after being dissatisfied with the results of arbitration, and picketers had assaulted strike-breakers and had forcefully interfered with the delivery of goods to one of the hotels. One of the union officials who had been arrested and fined assaulted a nonstriking employee after returning to the picket line, and other acts of violence had required the police to take actions to protect the peace.

Writing for the Court (except for Justice Owen J. Roberts, who did not participate), Justice Felix Frankfurter cited the Court’s decisions in Thornhill v. Alabama (1940) and American Federation of Labor v. Swing (1941), recognizing that the Court had upheld the right of peaceful picketing under the due process clause of the Fourteenth Amendment. He further wrote that the Court was bound to interpret the injunction that had been issued under state law in accord with the decision by Wisconsin courts, and they had clearly limited the injunction to violent picketing while upholding “freedom of speech and the right peacefully to picket.” Because this interpretation left “the petitioners’ freedom of speech unimpaired,” the Court affirmed the lower court’s decision.