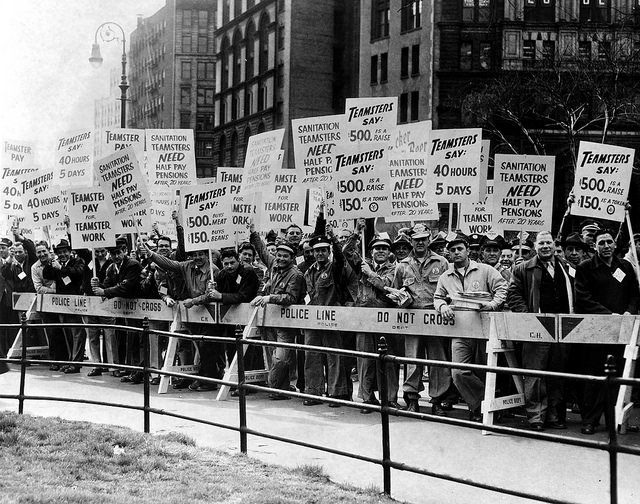 Teamster Union members holding picket signs supporting higher raises and pensions in 1954. The International Brotherhood of Teamsters Union was involved in a Supreme Court case that in 1950 upheld a state's injunction against picketing a self-employer’s place of business to force the owner to adopt a union shop. (Photo via Flickr, public domain.)

In International Brotherhood of Teamsters Union v. Hanke, 339 U.S. 470 (1950), the Supreme Court in a 5-3 majority sustained an injunction against picketing of a self-employer’s place of business that was directed toward forcing the owner to adopt a union shop. The Court decided that the injunction did not violate freedom of speech as guaranteed by the First and Fourteenth Amendments. This case was decided together with Automobile Drivers and Demonstrators Local Union No. 882 v. Cline, and the Court issued the decision on the same day as it also upheld another injunction against picketing in Hughes v. Superior Court of California (1950).

Justice Felix Frankfurter wrote the Court’s opinion relative to Hanke and Cline, the owners of used automobile and repair shops in Seattle, Washington. Frankfurter observed that picketing was a “hybrid” that “cannot dogmatically be equated with the constitutionally protected freedom of speech.” As indicated in Thornhill v. Alabama (1940), it was important to allow states to enforce their own public policies.

This point was further reiterated in Senn v. Tile Layers Protective Union (1937), when picketing was permitted in Wisconsin against a self-employed tile layer. In Hanke and Cline, the state of Washington chose to safeguard the opportunity of individuals who were self-employed to avoid union membership. Frankfurter thought it was irrelevant that Wisconsin’s policy had been expressed by its legislature and Washington’s by its courts.

Dissenters said the picketing should have been permitted

Justice Hugo L. Black dissented with a brief citation to his dissent in Carpenters and Joiners Union of America, Local No. 213 v. Ritter’s Cafe (1942). Justice Sherman Minton authored a dissent joined by Justice Stanley F. Reed, observing that the picketing in Hanke was peaceful. In distinguishing this case from Senn, Minton wrote that “because Wisconsin could permit picketing, and not thereby encroach upon freedom of speech, it does not follow that it could forbid like picketing” since the latter prohibition involved First and Fourteenth Amendment free speech protections. Minton feared that the injunction at issue was “not directed at any abuse of picketing but at all picketing.”