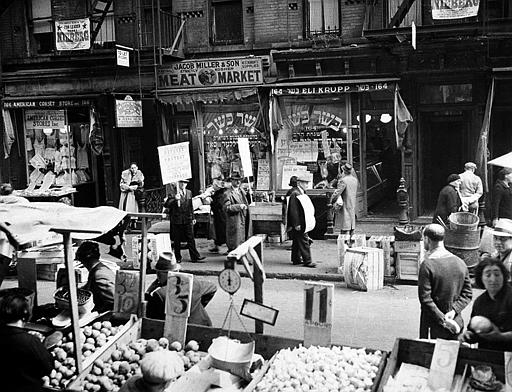 When a man whose house had been picketed by union members challenged a Wisconsin law that prohibited injunctions to stop peaceful picketing, the Supreme Court upheld the law, noting that peaceful picketing was protected by the First Amendment.  In this illustrative photo of such picketing, kosher butchers picket outside a shop in the heart of a Jewish neighborhood in New York because the shop's proprietor refused to close and join their "stoppage strike" in protest against high meat prices. (AP Photo, used with permission from the Associated Press)

The Supreme Court in Senn v. Tile Layers Protective Union, 301 U.S. 468 (1937), upheld a Wisconsin law that permitted peaceful picketing against claims that it violated the due process and equal protection clauses of the Fourteenth Amendment, which applies First Amendment protections to the states.

In this case, the Tile Layers Protective Union had picketed Paul Senn’s house because he was not only contracting for tile layers and helpers, but also doing some of the jobs that they normally performed.

State law allowed for such picketing as long as it was peaceful and lawful.

In the opinion for the Court, Justice Louis D. Brandeis noted that the speech at issue had been peaceful and consisted neither of “libelous attacks” nor “abusive epithets.” The picketing had not been done maliciously or with the desire to injure Senn, but in the hopes of compelling him to join the union and abide by its rules prohibiting contractors from engaging in competitive manual labor.

In dissent, Justice Pierce Butler, joined by Willis Van Devanter, James C. McReynolds, and George Sutherland, argued that the pickets were a means of interfering with Senn’s “right to engage in common occupations of life,” which he considered to be unalienable.

This involved the right to make contracts without impediment.

Butler wrote that the pickets had the unlawful purpose of seeking “to compel plaintiff to quit work as helper or tile layer” and to refrain from “establish[ing] on his jobs better wages, hours, or conditions.” Butler also thought that signs calling Senn’s actions “unfair” were mischaracterizations.