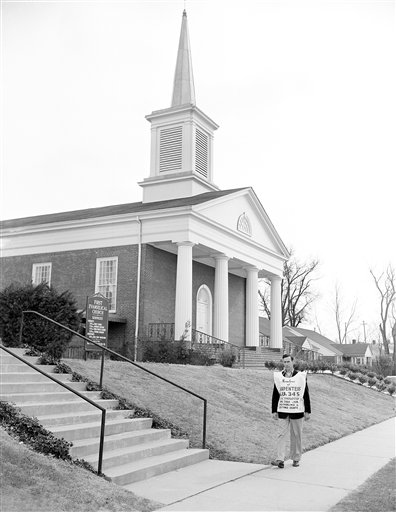 In 1953, the Supreme Court upheld an injunction against union members in Virginia who picketed in front of a school construction site, indicating the project was employing nonunion members. The court reasoned the pickets conflicted with the state's Right to Work statute that stated that membership or non-membership in a union is not a condition of employment. In a dissent, Justice William Douglas argued that picketing was a form of free speech. In this photo a year later, an AFL Carpenters Union member pickets outside of a church in Tennessee on Feb. 7, 1954, in protest of the employment of non-union workers for the installation of new pews. (AP Photo/Gene Herrick, used with permission from The Associated Press.)

Justice Harold H. Burton wrote the opinion of the Court that affirmed that Virginia could issue an injunction against picketing that conflicted with its right to work statute and affirmed that this picketing had done so.

Unions had set up pickets in front of a school construction site that indicated that the project was employing nonunion members. The effect was that many union members refused to work at the site. Virginia’s Right to Work Statute provides that “neither membership nor non-membership in a labor union shall be made a condition of employment” and “that a contract limiting employment to union members is against public policy.” Given Burton’s belief that one of the purposes of the pickets had been to discourage such employment, he ruled that the state had the right to enjoin the picketing.

Justice William O. Douglas’s dissent argued that the union had done little more “than advertise to union men and union sympathizers that nonunion men were employed on the job.” He stressed, “Picketing is a form of free speech . . . entitled to constitutional protection.” He did not believe that the lower court had made adequate determination of fact as to the picket’s illegal purpose, and he further questioned whether the injunction had been “narrowly drawn.”