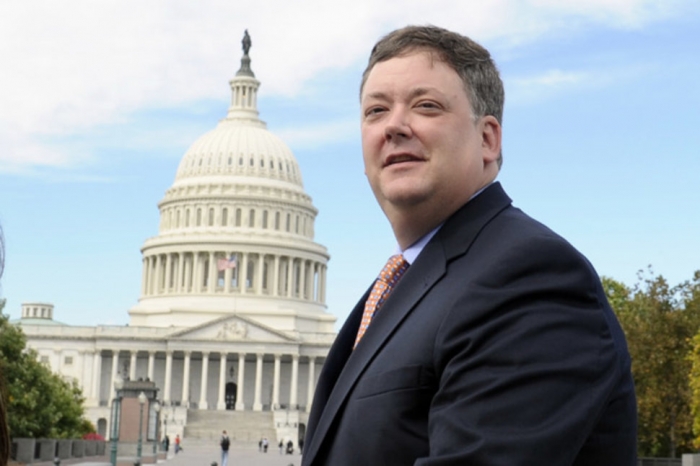 Republican activist Shaun McCutcheon of Hoover, Alabama, walks past the Capitol as he leaves the Supreme Court in 2013 after the Court's hearing on campaign finance. The Court struck down a federal law imposing aggregate limits on political contributions in McCutcheon v. FEC (2014), in part because the law was not the least restrictive means of combatting corruption in the political system. This least restrictive means test is part of the “strict scrutiny” applied by the courts to a law that restricts First Amendment rights. (AP Photo/Susan Walsh, used with permission from the Associated Press)

This test is part of the “strict scrutiny” applied by the courts to a law that restricts First Amendment or other constitutionally guaranteed rights, when government interest must be weighed against constitutional rights. To pass the test, a law must use the least speech-restrictive means possible to achieve a compelling state interest.

The Court ruled that this content-based law failed to meet strict scrutiny requirements because there was a less restrictive means of ensuring that minors did not access sexually explicit programming. The less restrictive alternative was another provision of the federal telecommunications law that cable operators must block individual channels if a parent-subscriber makes such a request.

Not all justices on the Supreme Court have embraced the least restrictive means test or even other formulations of strict scrutiny.

For example, Chief Justice William H. Rehnquist utilized a balancing approach referred to as “minimal scrutiny,” wherein the government need only show a “legitimate” or “rational” basis for a law infringing on freedom of expression. This approach has provided less protection for individuals’ freedom of expression than the least restrictive means test.

There has been a trend in Supreme Court decision making, especially in the area of freedom of religion, from the least restrictive means test toward the balancing approach.

In 1963, Justice William J. Brennan Jr. outlined a threefold inquiry in presenting the majority opinion in Sherbert v. Verner, where the Court established a high level of protection for religious freedom:

Justices have applied a balancing approach in some religious freedom cases

In more recent decisions, however, such as Employment Division, Department of Human Resources of Oregon v. Smith (1990), the Supreme Court limited the application of the least restrictive means test by holding that neutral and generally applicable laws — laws that do not specifically target a religious practice but apply across the board — should be judged according to minimal scrutiny.

In 1993, Congress passed legislation titled the Religious Freedom Restoration Act in an attempt to return all freedom of religion cases to the least restrictive means test, but the Supreme Court struck down the application of this law to states as unconstitutional in City of Boerne v. Flores (1997) on the grounds that Congress had violated the separation of powers principle by interpreting the meaning of the First Amendment.

For example, the Court invalidated a policy of the Arkansas Department of Corrections that prohibited inmates from having short beards in Holt v. Hobbs (2015). The Court also struck down the federal law imposing aggregate limits on political contributions in McCutcheon v. FEC (2014), in part because the law was not the least restrictive means of combatting corruption in the political system.

This article was originally published in 2009 and updated in 2017.​ Dr. Scott P. Johnson has been a professor of Political Science, Coordinator of Law & Society, and Pre-Law advisor at Frostburg State University since 1999. He has authored articles in law journals and law reviews regarding the Supreme Court's unanimous decisions, the presidential pardon power, and Justice Souter and the First Amendment. He also published an encyclopedia entitled Trials of the Century (ABC-CLIO, 2010) and a book entitled The Faces of Lee Harvey Oswald (Rowman & Littlefield, 2013).