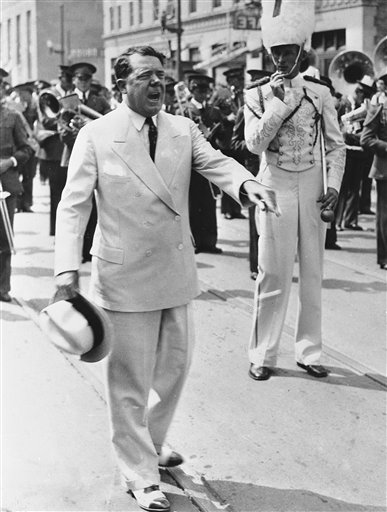 United States Senator Huey P. Long of Louisiana in Houston, Texas, in 1932. Long was influential in creating a Louisiana law that taxed newspapers with circulations larger than 20,000 copies per week. The Supreme Court declared the law unconstitutional in Grosjean v. American Press Co. (1936).(AP Photo, used with permission from the Associated Press)

In Grosjean v. American Press Co., 297 U.S. 233 (1936), citing the free press clause of the First Amendment, the Supreme Court invalidated a Louisiana law that imposed a 2 percent tax on the gross receipts of newspapers with circulations of more than 20,000 copies per week.

The law had been adopted in 1934, under the influence of Sen. Huey Long, a former governor who maintained control over the legislature after being elected as a U.S. senator in 1932. Thirteen papers qualified for the tax, and 12 of them charged that it was largely intended to punish the students at Louisiana State University, whose newspaper had published editorials criticizing Long.

Writing for a unanimous Court, Justice George Sutherland classified the tax as a “license tax.” As such, it served to curtail advertising from revenue and to restrict circulation.

He traced such taxes from John Milton’s 1644 “Appeal for the Liberty of Unlicensed Printing,” through a century of opposition to a parliamentary tax adopted in 1712 during the reign of Queen Anne, and then to the American colonists’ opposition to the Stamp Act of 1765 and to opposition in Massachusetts to a 1785 stamp tax on newspapers and magazines.

He concluded that “the restricted rules of the English law in respect of the freedom of the press in force when the Constitution was adopted were never accepted by the American colonists” or embodied within the First Amendment.

Although Near had focused on the strong presumption against prior restraint, Grosjean emphasized other dimensions in the protection of freedom of the press. Sutherland agreed that newspapers should not be “immune from any of the ordinary forms of taxation for support of the government” — a position the Court later affirmed in Minneapolis Star and Tribune Co. v. Minnesota Commissioner of Revenue (1983) — but he then concluded that the tax in this case interfered with the role of the press “as a vital source of public information.” Sutherland further observed that Louisiana’s tax was the only one of its kind in U.S. history to be enacted.

In conference, the justices had apparently initially decided to resolve this case on free exercise grounds, but a proposed concurrence by Benjamin N. Cardozo had steered the Court in the direction of due process instead (Cortner 1996: 165). Arguing at the end of the opinion that this reliance made it unnecessary to examine the equal protection aspects of the case, Sutherland observed that the “form” of the tax was suspicious in that it was not measured by the volume of advertisements but by “the extent of the circulation of the publication in which the advertisements are carried.”