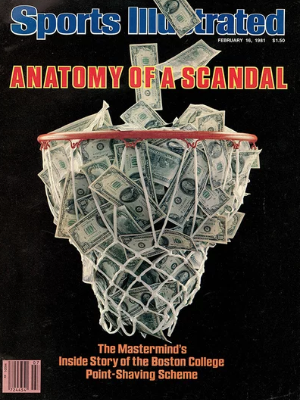 After Sports Illustrated was informed that this cover from Feb. 16, 1981 violated a Civil War-era counterfeiting law, the publisher sought to have the law overturned. The case went to the Supreme Court, which found that a provision in the law allowing photographs for some purposes but not others was not a reasonable restriction on speech because it was based on content of the message, thus violated the First Amendment.

In Regan v. Time, Inc., 468 U.S. 641 (1984), the Supreme Court struck down a provision of a federal counterfeiting law limiting illustrations to certain specified purposes on the ground that it failed part of the reasonable time, place, and manner restriction requirements for regulating speech.

The law, originally adopted during the Civil War, required that illustrations of U.S. currency be in black and white and be either over- or undersized and that the plates from which they are made be destroyed. The law was subsequently modified to exempt printing “for philatelic, numismatic, educational, historical, or newsworthy purposes in articles, books, journals, newspapers, or albums” (18 U.S.C. 504).

At issue was a 1981 cover for Sports Illustrated featuring color photographic reproductions of U.S. currency. After being warned that this violated the law, Time, Inc., publisher of Sports Illustrated, sought to have the law declared unconstitutional. The District Court for the Southern District of New York ruled in Time’s favor. The United States appealed.

Court said law was a restriction on content of speech

In the opinion for the Court, Justice Byron R. White asserted that the law violated the provision of a three-part test that prohibited regulation on “either the content or subject matter of speech.” White wrote, “A determination concerning the newsworthiness or educational value of a photograph cannot help but be based on the content of the photograph and the message it delivers,” thereby voiding the purpose requirement of the law. The statute, however, fulfilled the other two parts of the test in that it served a “significant governmental interest” and left open “ample alternative channels for communication of the information.”

White reasoned that the purpose provision of the law could be separated from the rest; he argued that the size and color requirements were similar “to the decibel level restrictions upheld by the Court in Kovacs v. Cooper (1949) and the size and height limitations on outdoor signs upheld by other courts.” He considered these to be reasonable manner restrictions.

White did not believe that Time had standing to challenge on grounds of “vagueness or overbreadth” a provision of the law limiting the ban of likenesses on currency to publications, since Time had no plans to produce images in any media form other than in its customary published form.

Justices decided to void the 'purpose' clause of the law

Justice William J. Brennan Jr., joined by Thurgood Marshall, concurred in part and dissented in part. He asserted that the offending provision of the law could not be separated from the others and that the entire law should therefore be struck down.

Justice Lewis F. Powell Jr., joined by Harry A. Blackmun, concurred in part and dissented in part as well. He argued to void the purpose requirement without reaching the constitutionality of the publication or color and size restrictions.

In dissent, Justice John Paul Stevens would have upheld the purpose clause. He believed that “Congress [had] adopted the exception in the spirit of the First Amendment” and that “courts should construe them in the same fashion.” He would also have upheld the color and size requirements as a proper means of preventing counterfeiting.