By Craig Hemmens
Related cases in Freedom of the Press 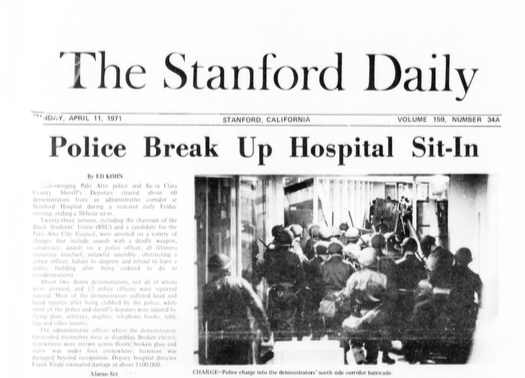 In Zurcher v. Stanford Daily, 436 U.S. 547 (1978), the U.S. Supreme Court held that the First Amendment’s freedom of the press does not bar the execution of such a search warrant if the innocent third party is the press. Police had searched the Stanford Daily newsroom for more pictures like the one on the front page here to help identify suspects who may have assaulted police. (Image of April 11, 1971, Stanford Daily via Stanford Daily)

In Zurcher v. Stanford Daily, 436 U.S. 547 (1978), the U.S. Supreme Court held that it is reasonable under the Fourth Amendment for a court to issue a search warrant for the premises of an innocent third party when the police have probable cause to believe there is evidence of criminal activity on the premises and that the First Amendment’s freedom of the press does not bar the execution of such a search warrant if the innocent third party is the press.

On Friday, April 9, 1971, officers of the Palo Alto Police Department and the Santa Clara County Sheriff’s Department responded to a call from the director of the Stanford University Hospital requesting the removal of several demonstrators who had seized control of the hospital’s offices. Several officers were injured while attempting to interrupt the unlawful demonstration at the hospital.

The next day, the Stanford Daily, a student newspaper, printed several photographs of the violent confrontation. The district attorney’s office then obtained a warrant to search the publication’s offices for the originals of these photos and any related photos the newspaper might have. The police were seeking the photographs to aid in identifying the people who had assaulted the police officers at the hospital. The search warrant did not allege that any members of the Stanford Daily were suspects, and a search of the newsroom failed to turn up any evidence beyond the originals of the published photos. The paper filed suit against the police, alleging that the search warrant violated both the First and Fourth Amendments.

The Supreme Court, in a 5-3 opinion authored by Justice Byron R.White, held that searches of the property of innocent third parties, including the press, are permissible, so long as police have probable cause to believe there is evidence of criminal activity on the premises. The press enjoys no special protection from the execution of valid search warrants. The Court noted that while the First Amendment bars governmental interference with the freedom of the press, it does not expressly prohibit search warrants where the press is involved. The requirements of “probable cause” and “reasonableness” afford adequate protection of the rights of the press.

This article was originally published in 2009. Craig Hemmens, JD, PhD, is a Professor in the Department of Criminal Justice and Criminology at Washington State University. He has published 20 books and over 200 articles and other writings, primarily focusing on legal issues in criminal justice.