By John R. Vile
Related cases in Freedom of Assembly, Prior Restraint 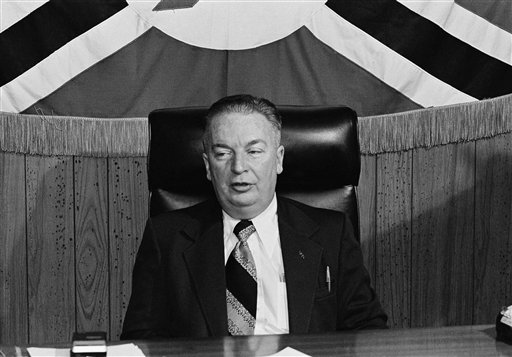 J.B. Stoner, chairman of the National States Rights Party, sits in his office, Wednesday, Feb. 16, 1977 in Marietta, Ga. In Carroll v. President and Commissioners of Princess Anne (1968) the Supreme Court struck down an injunction against the party, a white supremacist group, to stop them from rallying in Maryland. (AP Photo/Steve Helber, reprinted with permission from The Associated Press.)

In Carroll v. President and Commissioners of Princess Anne, 393 U.S. 175 (1968), the Supreme Court struck down a 10-day injunction that a Maryland court had issued against rallies by the National States Rights Party, a white supremacist group.

The organization had earlier rallied near Princess Anne, Maryland, where speakers had delivered speeches with racist content directed toward Jews and African-Americans, some of whom were in the audience.

Local officials then sought an injunction to prohibit the white supremacist group from participating in rallies in Somerset County for a period of 10 days and then later 10 months. The Maryland Court of Appeals upheld the 10-day injunction but struck down the 10-month injunction.

Court said injunction was incompatible with the First Amendment

Justice Abe Fortas of the Supreme Court observed for the Court that the case was not moot.

He noted that in Walker v. City of Birmingham (1967) the Court had upheld the conviction of people who had proceeded to demonstrate after being issued an injunction not to do so. The injunction at issue in Princess Anne constituted a form of prior restraint and had been issued without the participation of the National States Rights Party.

Although Cantwell v. Connecticut (1940) and other cases had established that the government might limit speech in cases where it was “interlaced with burgeoning violence,” prior restraint came to the court with a “heavy presumption against its constitutional validity.

”The record offered no reason for the petitioners having not been offered the right to attend the hearing; the failure to provide such notice and to hold an adversary hearing was “incompatible with the First Amendment.”

Justice Hugo Black concurred in the opinion. Justice William O. Douglas’s concurrence referred to his dissent in Kingsley Books, Inc. v. Brown (1957), in which he opposed the prior restraint of booklets alleged to be obscene, and to Freedman v. Maryland (1965), which had opposed prior restraint of movies.