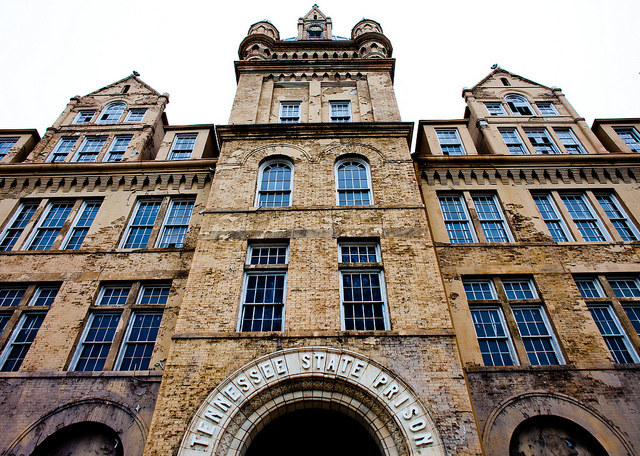 A Tennessee prison rule prohibited inmates from assisting others with legal matters, including preparing writs of habeas corpus. But the Supreme Court said in Johnson v. Avery (1969) that such a rule denied inmates access to the courts to file claims and invalidated it in 1969. Although rooted in due process, many later decisions characterize the Court’s opinion as affirming that inmates retain the First Amendment right to petition the courts for a redress of grievances. (Photo of the now-closed Tennessee State Prison in Nashville by Thomas Hawk, CC by NC-2.0)

In Johnson v. Avery, 393 U.S. 483 (1969), the Supreme Court invalidated a Tennessee prison rule that prohibited inmates from assisting others with legal matters, including preparing writs of habeas corpus, finding it denied many inmates access to the courts to file claims. Although rooted in due process, many later decisions characterize the Court’s opinion as affirming that inmates retain the First Amendment right to petition the courts for a redress of grievances.

Johnson was punished for assisting other inmates with legal papers

William Joe Johnson, who was serving a life sentence for rape, sued in 1965 after prison officials confiscated his law books and typewriter and placed him in solitary confinement because he had assisted other inmates with legal papers. Johnson claimed this violated several constitutional rights, most notably by making it difficult for illiterate inmates to file habeas corpus petitions challenging their incarceration.

A federal district court invalidated the rule, which it said had “the practical effect of silencing forever any constitutional claims which many prisoners might have” (M.D. Tenn. 1966). The U.S. Court of Appeals for the Sixth Circuit reversed the decision, finding that the prison officials had substantial interests in maintaining prison discipline and ensuring that law is practiced by licensed attorneys, not “jail-house lawyers.”

The U.S. Supreme Court reversed the decision. Writing for the majority, Justice Abe Fortas noted that “it is fundamental that access of prisoners to the courts for the purpose of presenting their complaints may not be denied or obstructed.” He wrote that Tennessee had failed to provide a meaningful alternative way for inmates to receive assistance with filing legal documents, such as from public defenders, law students, or volunteer lawyers.

Later the Court reduced the level of protection of inmates to access to the courts in Lewis v. Casey (1995) and ruled that an inmate did not have a First Amendment right to assist another inmate in legal matters in Shaw v. Murphy (2001).

Jailhouse lawyers remain, as the Vermont Supreme Court wrote recently, “a well-established fixture in the legal system:”  In Re Morales (2016).  They also continue to face retaliation from prison officials when they file grievances on behalf of themselves or others.