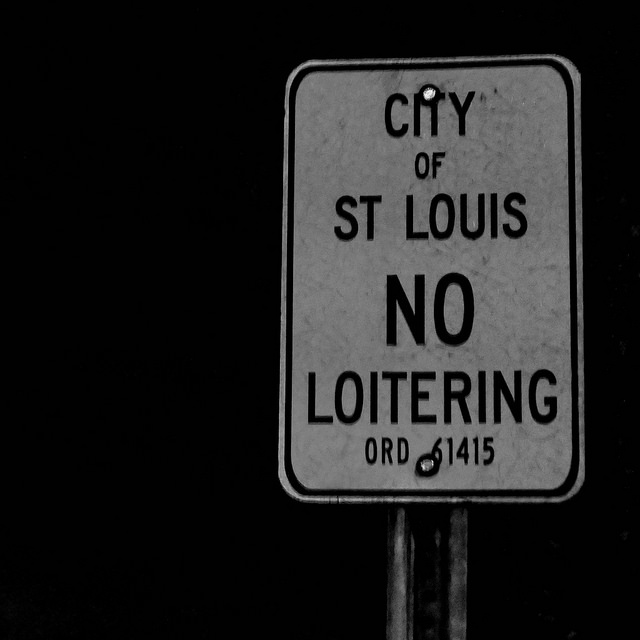 The Supreme Court ruled that a Cincinnati ordinance that made it a crime for three or more persons to gather on a public street and engage in annoying conduct was unconstitutionally vague and overbroad, and invalidated it in Coates v. City of Cincinnati. (Photo via Flickr by Paul Sableman of a no loitering sign in St. Louis, CC BY 2.0.)

In Coates v. City of Cincinnati, 402 U.S. 611 (1971), the Supreme Court invalidated a city law against loitering that negatively affected freedom of assembly.

Coates charged with gathering and engaging in annoying conduct

Cincinnati officials charged several individuals, including Coates, a college student, with violating an ordinance making it a crime for three or more persons to gather on a public street and engage in annoying conduct.

A state court convicted the individuals, and the state supreme court affirmed, noting that “the word ‘annoying’ is a widely used and well understood word.” Coates contended that the law violated due process and the First Amendment because it was too vague and infringed on the freedoms of assembly and association.

The Supreme Court struck down the ordinance in a 6-3 vote.

According to Stewart, “conduct that annoys some people does not annoy others.” He also reasoned that the ordinance violated the First Amendment rights to freedom of assembly and association, warning that city officials could silence First Amendment expressive activities by classifying them as annoying.

Justice Hugo L. Black filed a separate opinion, arguing that the Court should vacate the convictions but send the case back to the state court to supplement the record to establish what type of conduct was allegedly annoying.

Justice Byron R. White dissented, finding that the Court went too far in invalidating the ordinance on its face. “Any man of average comprehension should know that some kinds of conduct, such as assault or blocking passage on the street, will annoy others and are clearly covered by the ‘annoying conduct’ standard of the ordinance,” he wrote.