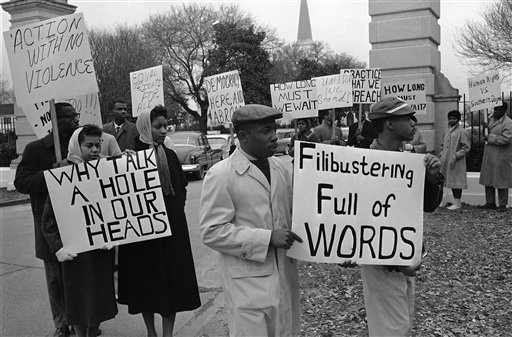 In Edwards v. South Carolina (1963), the Supreme Court ruled that South Carolina had violated students’ First Amendment rights when police dispersed a peaceful protest against segregation. In this photo, students protesting segregation begin parading in front of Dillard University in New Orleans in 1960. About 200 students participated with care to maintain spacing between themselves on the sidewalk. (AP Photo/RWT, used with permission from the Associated Press)

In Edwards v. South Carolina, 372 U.S. 229 (1963), the Supreme Court ruled that South Carolina had violated students’ First Amendment rights of peaceable assembly, speech, and petition when the police dispersed a peaceful protest against segregation. The case illustrates one of the roles played by the First Amendment in the civil rights movement of the 1950s and 1960s.

The case began on March 2, 1961, when a group of African-American high school and college students marched on the South Carolina State House grounds in Columbia to protest segregation. Carrying placards reading “Down with Segregation” and similar protest phrases, the students walked single and double file for approximately 45 minutes, attracting a crowd of 200 to 300 onlookers, when the police gave them 15 minutes to disperse.

Instead of leaving, the students chanted patriotic and religious songs. At the end of the 15 minutes, police officers arrested the students. A magistrate’s court in Columbia convicted 187 students for violating a breach-of-the-peace law. The convictions carried a fine of between $10 and $100 and a jail sentence of 10 to 30 days. The South Carolina Supreme Court affirmed the convictions.

In the majority opinion for the Supreme Court, Justice Potter Stewart wrote that the students’ actions “reflect an exercise of these basic constitutional rights [to speech, assembly, and petition] in their most pristine and classic form.” Stewart emphasized that the students acted peaceably and never threatened violence or harm. He concluded that the First and 14th Amendments do not “permit a State to make criminal the peaceful expression of unpopular views.”

Justice Tom C. Clark, in a lone dissent, asserted that the majority understated the facts that faced the police in Columbia and that the students’ actions were “by no means the passive demonstration which this Court relates.”

He believed that the police had acted reasonably in preventing a possible riot. “But to say that the police may not intervene until the riot has occurred is like keeping out the doctor until the patient dies,” he wrote.