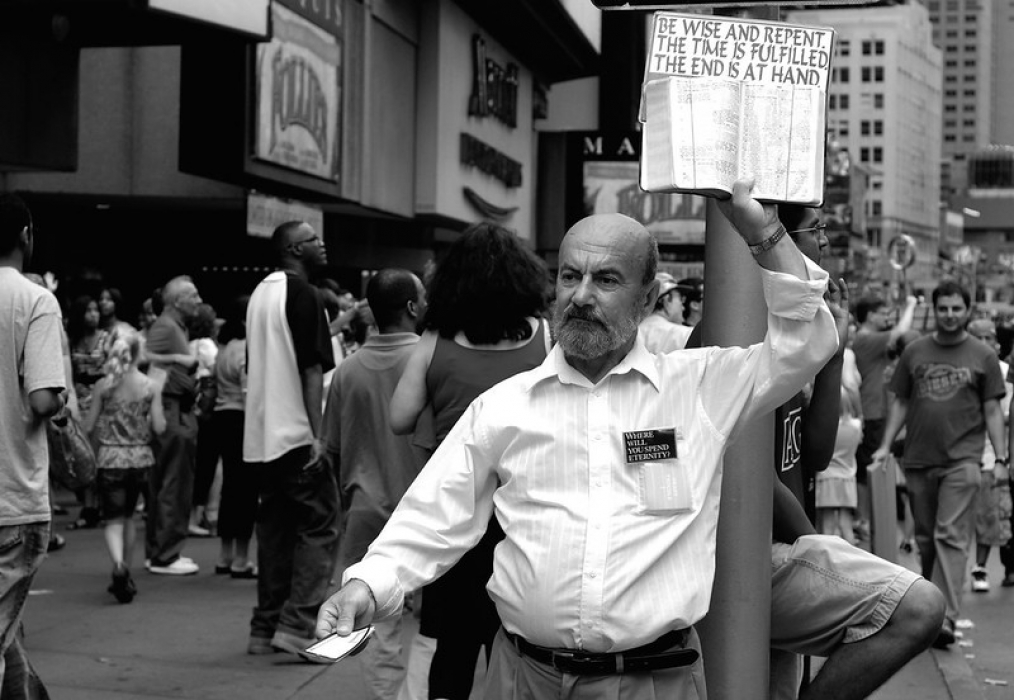 In Fowler v. Rhode Island (1953), the Supreme Court found that an ordinance that prevented a Jehovah's Witness minister from conducting a religious service in a public park, but allowed other religious services to be held, violated the First Amendments. (Image of a street preacher via Russell Petcoff on Flickr, CC BY 2.0)

In Fowler v. Rhode Island, 345 U.S. 67 (1953), the Supreme Court found that a municipal ordinance that prevented a minister affiliated with Jehovah’s Witnesses from conducting a religious service in a public park, but allowed other religious services to be held, violated the First and 14th Amendments.

Religions must be treated equally under the First Amendment

The case was significant in defining the dynamic relationship between religion and government, touching on premises from the establishment and free exercise clauses of the First Amendment. The state must treat all religions equally; otherwise it violates the establishment clause. The state also cannot determine what is appropriately labeled “religious” without risking violation of the free exercise clause.

William B. Fowler, a minister, delivered a sermon titled “The Pathway to Peace” to some 400 attendees, about 150 of whom were Jehovah’s Witnesses. The meeting in the park was informal and peaceful. Authorities charged Fowler with having violated a city ordinance requiring a permit to speak in a public park, and he was found guilty. Rhode Island’s Supreme Court affirmed his conviction. In arguments before the U.S. Supreme Court, Rhode Island relied on the decision in Davis v. Massachusetts (1897) to support its permit requirement.

Justice William O. Douglas wrote the Court’s opinion, which he said was not directly related to the Davis decision as argued. Instead, the justices’ decision centered on the ground that other religious groups, such as Catholics and Protestants, were given full rein to hold religious services and other devotionals in public parks.

The decision cited Niemotko v. Maryland (1951), which involved discrimination against Jehovah’s Witnesses in a similar circumstance. Justice Felix Frankfurter and Justice Robert H. Jackson concurred. Justice Frankfurter indicated that he was relying on the equal-protection clause of the 14th Amendment rather than on the First Amendment.