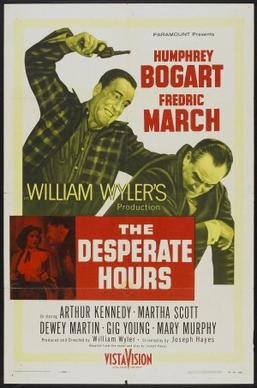 A poster from the film, The Desperate Hours, which was based on a 1955 play of the same name. The film, play and a book were based loosely on an actual event in Pennsylvania in which the Hill family was taken hostage. James Hill, the father, claimed a review of the play in Life Magazine portrayed his family in a false light. The Supreme Court said to win the claim, the family had to prove actual malice or the First Amendment freedom of the press would be burdened. (Image via Wikimedia Commons, fair use rationale)

The Court’s decision provided guidance on how courts should handle the species of invasion of privacy claims — called false light — most similar to defamation claims. It also shed more light on how the Court would apply its landmark libel decision in New York Times v. Sullivan.

In New York Times, the Court held that a public official cannot recover damages in a libel action unless he or she can show the publisher or speaker made false statements with actual malice — that is, with knowledge the statements were false or with reckless disregard as to their truth. In Hill, the Court applied the same standard to “false light” privacy cases.

The lawsuit in Hill arose from an article in the February 1955 issue of Life Magazine. In the article, the author reviewed “Desperate Hours,” a Broadway play loosely based on a 1952 hostage standoff in Whitemarsh, Pennsylvania.

Broadway play review suggested hostages had been roughed up

The standoff began when three escaped convicts entered the home of James Hill and his wife and five children. The convicts held the family hostage for nineteen hours before releasing them unharmed.

In a news interview after his release, Hill stressed that the convicts had treated his family courteously, had not harmed them, and had not been violent in any way.

The article, however, included photos from the play and captions suggesting a son had been “roughed up” by the convicts, a daughter had bitten one of the convict’s hands to make him drop a gun, and Hill had thrown a gun through a door after the convicts foiled an escape attempt.

Hill sued, not because the article and photos damaged his reputation but because he believed Life had portrayed the event falsely so as to generate financial gain. A trial court ultimately awarded Hill $30,000, a verdict the New York Court of Appeals affirmed.

In a 5-4 decision, the Supreme Court reversed the lower courts’ rulings.

“We create a grave risk of serious impairment of the indispensable service of a free press in a free society if we saddle the press with the impossible burden of verifying to a certainty the facts associated in news articles with a person’s name, picture or portrait, especially when the content of the speech itself affords no warning of prospective harm to another through falsity,” Brennan wrote.

Central to the Court’s ruling was Brennan’s view that a price of freedom was the risk of being portrayed in a false light. “The risk of exposure is an essential incident of life in a society which places a primary value on freedom of speech and of press,” Brennan wrote.

Justice John Marshall Harlan II concurred in part and dissented in part, saying he believed negligence, not actual malice, was the appropriate standard for liability.

Chief Justice Earl Warren and Justices Abe Fortas and Tom C. Clark dissented, agreeing with Harlan that negligence was the appropriate standard and saying they believed Hill had proved negligence at trial.