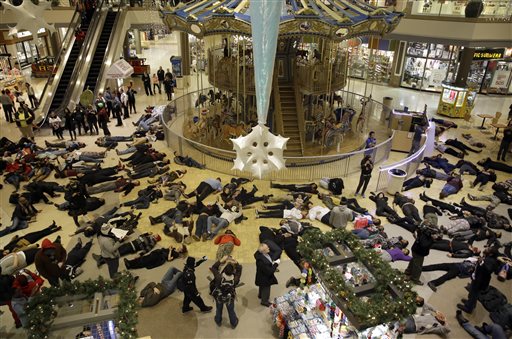 The Supreme Court in a 5-4 decision in 1972 said that private shopping mall did not have to provide a forum for Vietnam War protestors who were there handing out leaflets. In this photo, years later, protesters stage a "die in" inside Chesterfield Mall in 2014 in Chesterfield, Missouri. The crowd disrupted holiday shopping amid a protest triggered by a grand jury's decision not to indict a police officer who fatally shot Michael Brown in nearby Ferguson. (AP Photo/Jeff Roberson, used with permission of the Associated Press)

The Supreme Court’s decision in Lloyd Corporation, Ltd. v. Tanner, 407 U.S. 551 (1972), which emerged from the divisive debates that surrounded the Vietnam War, specified the limits to free speech on private property.

On November 14, 1968, Donald Tanner, Betsy Wheeler, and Susan Roberts went inside the Lloyd Center mall in Portland, Oregon, to distribute notices of a meeting of the “Resistance Community” to protest the draft and the war in Vietnam.

A mall security guard told the protesters that they were trespassing and that they would be arrested unless they stopped distributing leaflets within the Lloyd Center. They departed and filed suit, claiming that their ejection from the mall violated their First Amendment right to free speech.

The district court finding of fact derived from two Supreme Court precedents. In Marsh v. Alabama (1946), the Supreme Court overturned the trespassing conviction of Jehovah’s Witnesses who were arrested for distributing religious literature in the company town of Chickasaw, Alabama.  In that case, Justice Hugo L. Black equated company-owned Chickasaw with “any other town and shopping center.”

The Supreme Court’s 5-4 decision rejected this analysis and reversed the holding.

Writing for the majority, Justice Lewis F. Powell Jr. observed that the “[r]espondents’ argument . . . misapprehends the scope of the invitation extended to the public. The invitation is to come to the Center to do business with the tenants. . . . There is no open-ended invitation to the public to use the Center for any and all purposes.”