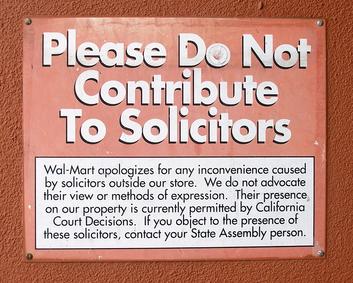 Photo and example of "Please Do Not Contribute To Solicitors" signage (no longer present a the same site two months later) at the Wal-Mart store in Mountain View, California, located in the San Antonio Shopping Center. As a result of the U.S. Supreme Court free speech case iPruneYard Shopping Center v. Robins, 447 U.S. 74 (1980), similar signs are often seen at large shopping centers in the U.S. state of California. (Image via Wikimedia Commons, fair use)

In PruneYard Shopping Center v. Robins, 447 U.S. 74 (1980), the Supreme Court ruled that California could interpret its state constitution to protect political protesters from being evicted from private property, held open to the public, without running afoul of the Fifth Amendment. In this case, the California court went beyond the federal rule and held that, under the California constitution, a shopping mall owner could not exclude a group of high school students who were engaged in political advocacy. The state court decision has been adopted in one form or another by a substantial minority of states.

Student activists sued mall for kicking them out

Some high school students, enlisting support for their opposition to a United Nations resolution against Zionism, set up a table at PruneYard Shopping Center to distribute literature and solicit signatures for a petition. They were told to leave by a security guard because they were violating the shopping center’s rule against “publicly expressive” activities. The students sued in California state court, alleging that their right to free speech had been violated.

Decision reaffirmed that states can give their citizens greater liberties

The decision is important for state constitutional law, reaffirming the notion that a state supreme court is free to interpret its state constitution to provide greater protection for individual liberties than the U.S. Supreme Court does under the Bill of Rights. The Supreme Court ruling in PruneYard is also significant for its permitting the state of California to undermine the right to exclude, traditionally one of the most significant of private property rights, for the benefit of the public in general and without any compensation under the “takings” clause. It thus represents an important precedent outside the First Amendment context and has continuing relevance to the hotly contested law of “regulatory takings.”

The underlying California Supreme Court case continued the development of the body of law addressing free speech on privately owned property that was begun by the United States Supreme Court in Marsh v. Alabama (1946), Lloyd Corporation Ltd. v. Tanner (1972), and Amalgamated Food Employees Union Local 590 v. Logan Valley Plaza (1968). In Marsh, the Court ruled that protesters in a company-owned town could not be criminally charged with trespass, whereas in Lloyd and Logan the Court respectively extended and then retracted First Amendment protection to political speech conducted in privately owned shopping malls.

This article was originally published in 2009. Paul Gowder is a law professor at Northwestern University Pritzker School of Law and a former civil rights and legal aid lawyer. He is also the author of The Rule of Law in the Real World (Cambridge University Press, 2016).