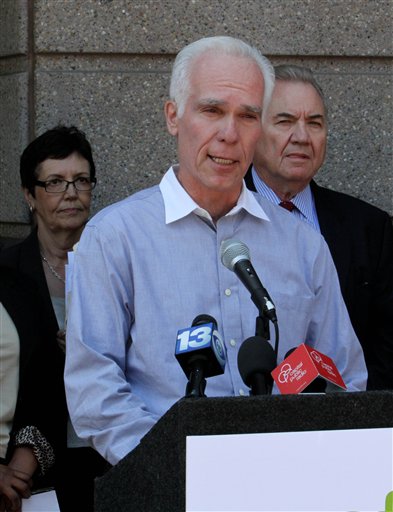 Gil Garcetti pictured in 2011. Garcetti is the former Los Angeles District Attorney involved in Garcetti v. Ceballos. Ceballos was an employee in Garcetti's office who wrote a critical memo and alleged retaliation by his employer. The court ruled that the First Amendment does not apply to speech issued as part of the routine duties of public employees. (AP Photo/Rich Pedroncelli, with permission from the Associated Press.)

The Supreme Court in Garcetti v. Ceballos, 547 U.S. 410 (2006), ruled that public employees do not have a First Amendment protection for speech issued as part of their official duties.

California prosecutor Richard Ceballos alleged that his employer had retaliated against him after he criticized the handling of a search warrant affidavit that he believed contained untruthful statements by a sheriff’s deputy. Ceballos claimed that his transfer to a less-desirable position and office location were a direct result of his critical speech in a memo, his testimony at a suppression hearing, and a public speech he delivered at a conference.

A federal district court ruled that Ceballos had no First Amendment claim for speech delivered in the memo prepared as part of his routine job duties. A three-judge panel of the Ninth Circuit Court of Appeals reversed in Ceballos v. Garcetti (2004), determining that Ceballos’s memo concerning lack of veracity by law enforcement officials constituted speech on a matter of public concern within the meaning of Pickering v. Board Education (1968). The appeals court concluded that Ceballos’s free speech rights trumped the district attorney’s efficiency interests.

The district attorney appealed to the Supreme Court, which reversed the Ninth Circuit in a 5-4 vote.

Writing for the majority, Justice Anthony M. Kennedy ruled that “when public employees make statements pursuant to their official duties, the employees are not speaking as citizens for First Amendment purposes, and the Constitution does not insulate their communications from employer discipline.”

Justices John Paul Stevens, David H. Souter, and Stephen G. Breyer each wrote dissenting opinions. Stevens criticized the majority’s decision as “misguided” and stated that “the notion that there is a categorical difference between speaking as a citizen and speaking in the course of one’s employment is quite wrong.”

Souter—joined by Justices Stevens and Ruth Bader Ginsburg—reasoned that public employees retain First Amendment rights in their official workplace speech when the employee “speaks on a matter of unusual importance and satisfies high standards of responsibility in the way he does it.” Souter warned that the majority’s decision may imperil “academic freedom in public colleges and universities, whose teachers necessarily speak and write pursuant to official duties.”

Breyer wrote a narrower dissent, in which he focused on the “special constitutional obligations” imposed upon prosecutors who must disclose any exculpatory evidence to the defense. To Breyer, prosecutors such as Richard Ceballos need “augmented” First Amendment protection when they speak out regarding possible governmental abuse.