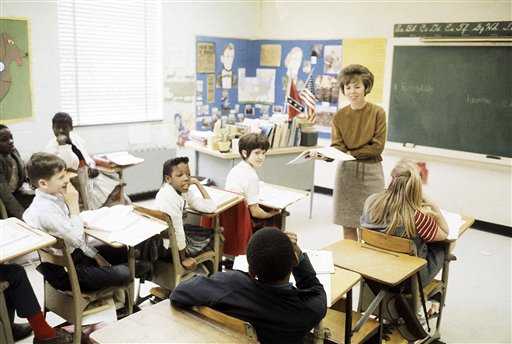 A white grammar school teacher in an integrated classroom in 1969. In 1979, an African-American school teacher in a newly integrated school was fired after complaining privately to a superior about discrimination. In Givhan v. Western Line Consolidated School District, the Court decided that public employees do not forfeit First Amendment protection just because they communicate privately to a superior. (AP Photo, used with permission from the Associated Press.)

The Supreme Court decision in Givhan v. Western Line Consolidated School District, 439 U.S. 410 (1979), established the principle that public employees do not forfeit First Amendment protection simply because they communicate on matters of public concern privately to a superior.

Givhan complained about discrimination at her school and was fired

Bessie Burnham Givhan, an African American public school teacher in Mississippi, worked for a junior high school integrated in the 1970–1971 school year. She believed that the school with more black students was not receiving adequate school supplies compared to the schools with more white students. She complained about this discrimination to her principal.
After her contract failed to be renewed, Givhan sued, alleging racial discrimination and a violation of her First Amendment right to free speech. A federal district court ruled in favor of Givhan on her First Amendment claim, but the Fifth Circuit Court of Appeals reversed. The circuit court determined that Givhan had no First Amendment protection because she had communicated her views privately rather than publicly.

The Supreme Court unanimously reversed. In the opinion for the Court, Justice William H. Rehnquist wrote that it did not “support the conclusion that a public employee forfeits his protection against governmental abridgment of freedom of speech if he decides to express his views privately rather than publicly.”

The Court remanded the case to the lower courts to determine whether the school district could establish, using the precedent in Mt. Healthy City School District Board of Education v. Doyle (1977), whether it would have terminated Givhan even if she did not engage in constitutionally protected speech. On remand, the district court ruled that the school district’s reasons for terminating Givhan were pretextual. It awarded her damages, attorney fees, and reinstatement. Givhan returned to the school and worked there for several years.