By Shawn Healy
Related cases in Speech on Public Property, Freedom of Assembly, Civil Rights Movement and the First Amendment 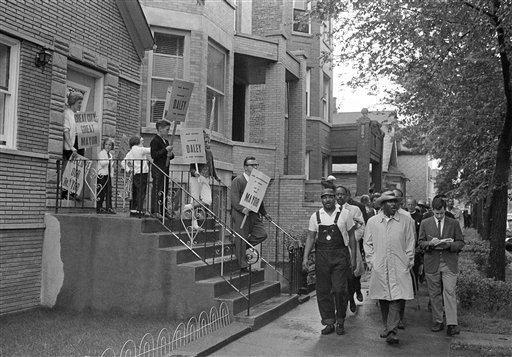 Comedian Dick Gregory (in light raincoat) leads marchers in Chicago in 1965 who were protesting administration of schools superintendent Benjamin Willis. The protestors were arrested after refusing to leave due to unruly spectators. The Supreme Court upheld the rights of the peaceful protestors over the police actions in Gregory v. City of Chicago (1969) (AP Photo/Paul Cannon, used with permission from the Associated Press.)

Comedian and political activist Dick Gregory and his group had become disenchanted with the slow pace of desegregation in Chicago public schools. They called for the removal of Superintendent Benjamin Willis and prodded Chicago mayor Richard J. Daley to facilitate this process. On August 2, 1965, the group conducted a three-and-a-half-hour march from the Loop District to the South Side neighborhood where the mayor lived. They were escorted by more than 40 police officers and an assistant city attorney.

Police could not contain spectators and asked protestors to leave

By the time the group reached the mayor’s neighborhood, the crowd of spectators began to grow unruly, spewing racial epithets and hailing eggs and rocks at the demonstrators. By 9:30 at night the police felt that they could no longer contain the onlookers and asked Gregory and his group to leave the scene. When they refused they were arrested and later convicted on charges of disorderly conduct. The Illinois Supreme Court affirmed the charges.

Appearing before the Supreme Court, the petitioners contested the denial of their First Amendment rights to assemble peacefully in public and petition the government for redress of grievances. They argued that disruptive bystanders in effect had exercised a “heckler’s veto” by provoking violence, prompting the police action against those assembling peacefully. The city argued that it had the right to stop the demonstration to prevent a riot, and the arrest was warranted because the petitioners disobeyed a police order to disperse.

Writing for a unanimous Court, Chief Justice Earl Warren called this a “simple case,” considering the petitioners’ march was “peaceful and orderly” and therefore worthy of First Amendment protection. The charges of disorderly conduct were misapplied and stood in violation of due process per Thompson v. City of Louisville (1960). Warren argued that the “petitioners were charged and convicted for holding a demonstration, not for a refusal to obey a police officer.”

Concurring with the judgment, Justice Hugo L. Black criticized the disorderly conduct law itself, labeling it a “meat-ax ordinance” because it prohibited many lawful and constitutional activities. It was neither “narrowly drawn” to regulate demonstrations and marches, nor did it set forth time, place, and manner restrictions. Black observed that the police officers had applied the law hypocritically since they had found no unlawful conduct by the demonstrators along the entire five-mile march.

This article was originally published in 2009. Shawn Healy is an Adjunct Lecturer at the University of Illinois Chicago.