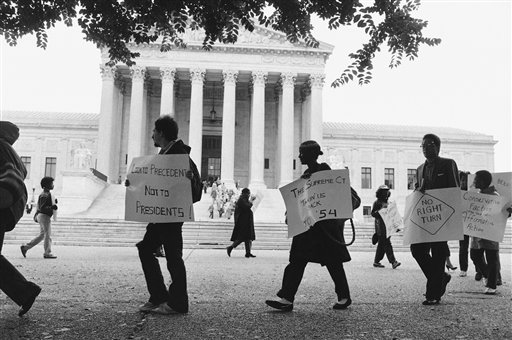 In 1983, the Supreme Court said that a federal law that prohibited picketing outside the U.S. Supreme Court building was improperly applied to the sidewalks in violation of the First Amendment's protection of free speech. In United States v. Grace, the Court said sidewalks have traditionally been held open for expressive activities and considered to be public forums. As such, the interest in maintaining order or insulating the courts from lobbying was insufficient to sustain a total ban on picketing and demonstrations on the sidewalks outside the court. In this 1984 photo, members of the National Black Law Student Association picket on the sidewalks in front of the Supreme Court building on Monday, Oct. 1, 1984, to protest what they say is unfair justice by the high court for their people. (AP Photo/John Duricka, used with permission from The Associated Press.)

In this case, one protester distributed leaflets on the sidewalk outside the Court in Washington, D.C., and another had carried a First Amendment sign before being told that their actions violated a section of the U.S. Code prohibiting the “display [of] any flag, banner, or device designed or adapted to bring into public notice any party, organization, or movement” in the vicinity. They sought an injunction against enforcement of the law.

Justice Byron R. White’s decision for the Court observed that “[t]here is no doubt as a general matter peaceful picketing and leafleting are expressive activities involving ‘speech’ protected by the First Amendment.”

He further noted that “public places” were generally connected to “public forums” and that the government could enact reasonable time, place, and manner restrictions so long as they “are content-neutral, are narrowly tailored to serve a significant government interest, and leave open ample alternative channels of communication.”

The government argued that the grounds of the Supreme Court were a “nonpublic forum,” but White observed that the law in question had been extended to cover surrounding sidewalks.

Such sidewalks “are among those areas of public property that traditionally have been held open to the public for expressive activities and are clearly within those areas of public property that may be considered, generally without further inquiry, to be public forum property.” The interest in maintaining order or insulating courts from lobbying was insufficient to sustain a total ban on expressive activities in this venue.

Marshall: Court should have struck down law as unconstitutional on its face

Justice Thurgood Marshall wrote a partial dissent, arguing that the Court should have struck down the law as being unconstitutional on its face. Justice John Paul Stevens argued similarly that neither action at issue — the distribution of pamphlets or the display of a sign with the words of the First Amendment— fell within the parameters of what the U.S. Code prohibited.