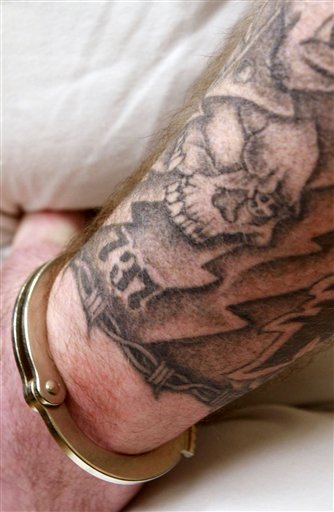 Can gang membership be introduced by prosecutors during the sentencing part of the trial as relevant to the person’s character even if not relevant to the crime committed? In 1992, the Supreme Court said no in Dawson v. Delaware. The Court ruled that the First Amendment limits the introduction of evidence of a criminal defendant’s beliefs during sentencing when those beliefs have no bearing on the issue being tried. In that case, David Dawson was convicted of first-degree murder in the stabbing death of a white woman and the stealing of her car after he escaped from a Delaware prison. During the penalty phase, prosecutors introduced evidence that Dawson, who was white, was a member of — and had tattooed on his right hand the name of — the Aryan Brotherhood, a prison gang with racist beliefs and he was sentenced to death. (This photo from 2011 shows an Aryan Brotherhood prison gang tattoo on a California inmate. AP Photo/Rich Pedroncelli, used with permission from the Associated Press)

The Supreme Court ruled in Dawson v. Delaware, 503 U.S. 159 (1992), that the First Amendment imposes limitations on the introduction of a criminal defendant’s group associations during sentencing.

David Dawson, a prison escapee, was convicted of crimes including murdering a woman while committing a burglary. During the penalty phase of the trial, prosecutors introduced evidence that Dawson was a member of — and had tattooed on his right hand the name of — the Aryan Brotherhood, a prison gang with racist beliefs.

Prosecutors submitted a stipulation to the court that read: “The Aryan Brotherhood refers to a white racist prison gang that began in the 1960's in California in response to other gangs of racial minorities. Separate gangs calling themselves the Aryan Brotherhood now exist in many state prisons including Delaware.”

Although Dawson agreed to the stipulation to prevent the state from introducing further evidence about the gang, he contended that the introduction of this evidence violated his First Amendment free association rights. The trial court imposed the death penalty, which the Delaware Supreme Court affirmed.

Court said defendant's association was not relevant to his crime

On appeal the U.S. Supreme Court agreed 8-1 that introducing Dawson’s association with the Aryan Brotherhood infringed on his First Amendment rights. Writing for the Court, Chief Justice William H. Rehnquist declared that “the receipt into evidence of the stipulation regarding his membership into the Aryan Brotherhood was constitutional error.”

Rehnquist determined that the First Amendment “does not erect a per se barrier to the admission” of evidence of beliefs and association. In this case, however, Rehnquist explained that Dawson’s alleged association was not relevant to the crime he committed.

Both Dawson and his victim were white; “elements of racial hatred were therefore not involved in the killing.”

To Rehnquist these circumstances distinguished Dawson from Barclay v. Florida (1983), in which the Court ruled that a judge could consider defendant Elwood Barclay’s membership in the Black Liberation Army in sentencing him for the death of a white woman.

Rehnquist noted that “on the present record one is left with the feeling that the Aryan Brotherhood evidence was employed simply because the jury would find these beliefs morally reprehensible.”

Justice Clarence Thomas dissented, finding evidence of Dawson’s gang membership relevant to his character. He added that “the Due Process Clause, not the First Amendment, traditionally has regulated questions about the improper admission of evidence.”