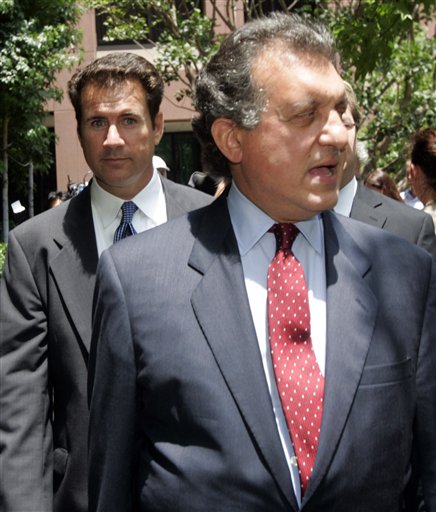 Dominic Gentile, right, walks with a client in 2005. In 1991, Gentile was involved in the Supreme Court case Gentile v. State Bar of Nevada for statements he made at a press conference about a trial. The Supreme Court found Nevada's restriction on attorney speech to be too vague, but upheld the constitutionality of some restriction on attorney speech. (Ap Photo/Lenny Ignelzi, used with permission from the Associated press.)

In Gentile v. State Bar of Nevada, 501 U.S. 1030 (1991), the Supreme Court struck down Nevada’s judicially imposed limits on attorney speech as too vague while also upholding the constitutionality of some restrictions on attorney speech.

This case involved statements made at a press conference by Dominic Gentile, a Las Vegas–based criminal defense attorney, who had asserted his client’s innocence and said that the police were corrupt.

Nevada Supreme Court Rule 177 had placed limits on statements an attorney could make if he or she “knows or reasonably should know that it will have a substantial likelihood of materially prejudicing” the finder of fact in a case.

Nevada rule found to be too vague

The majority opinion explained that in specific, the safe harbor provision of the rule — which allowed attorneys to make certain classes of statements in spite of the rule’s prohibition — failed to provide adequate notice to Gentile that his statements were barred. The Court held that the rule’s use of such words as general and elaboration, both classic terms of degree, failed, in the language of Grayned v. City of Rockford (1972), to provide “fair notice to those to whom it is directed.”

The Court also found that Gentile had made efforts to comply with the rule but still ran afoul of its strictures. The risk of discriminatory enforcement was enough to justify the Court’s finding even if petitioner could not make such a showing in this case.

Rehnquist argued that the state supreme court’s standard of barring statements that would cause a substantial likelihood of material prejudice in a case was sufficient to protect Gentile’s interest.

The chief justice borrowed from the clear and present danger test in deciding whether a state may prohibit media speech or publication about a pending trial. The Court held that when First Amendment rights are implicated, those interests must be balanced against the state’s legitimate interest in regulating the activity in question. It found that the substantial likelihood test fit this mold because it was designed to protect the integrity and fairness of the state judicial system and imposed only narrow and necessary limitations on lawyers’ speech.

Alan Tauber is a constitutional law attorney in Washington. In addition to a law degree from George Washington University School of Law, Tauber has a master’s degree in political science. This article was originally published in 2009.