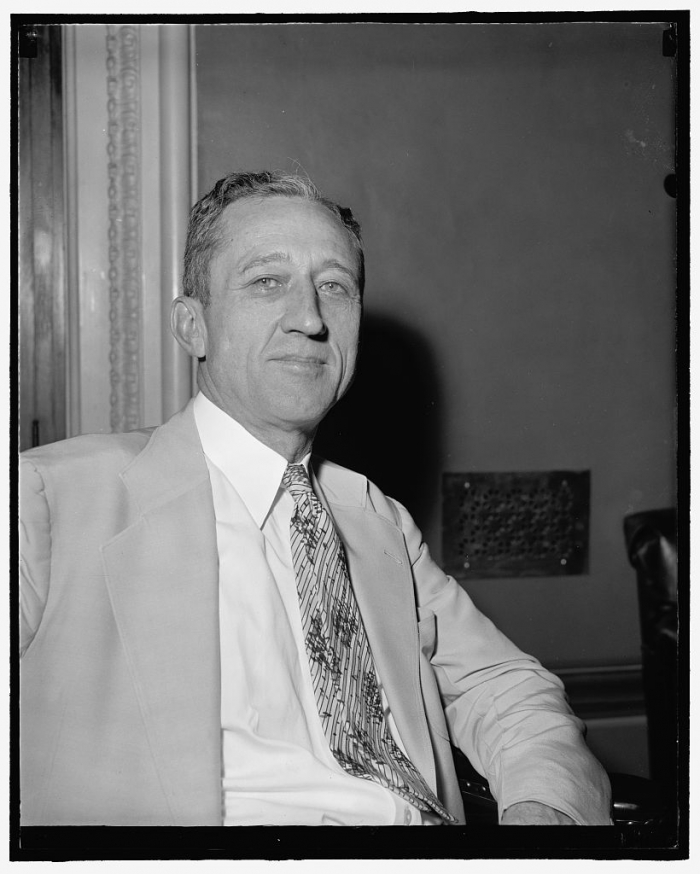 The Hatch Act — named for the U.S. senator who introduced it, Carl A. Hatch, pictured above — was upheld by the U.S. Supreme Court in a divided vote in 1947. The Hatch Act prevented federal employees from taking active parts in political management or campaigns as a way to promote political neutrality in government. In United Public Workers of America v. Mitchell, these restrictions were challenged as an infringement on free speech rights of government employees. The Court ruled that the free expression rights of government employees needed to be weighed against "the requirments of orderly administration of administrative personnel." (Photo of the New Mexico senator Hatch by Harris & Ewing, public domain.)

In United Public Workers of America v. Mitchell, 330 U.S. 75 (1947), the Supreme Court, by a vote of 4-3, upheld the provisions of the Hatch Act of 1939, which prevented federal employees from taking “any active part in political management or in political campaigns.”

Congress passed the Hatch Act out of concern that public employees might use their public positions for specific partisan purposes. It hoped, through the act, to promote political neutrality, so that neither the government nor public employees, while working, would favor one political party over another, thereby undermining public confidence in a fair and impartial government.

Justice Stanley F. Reed wrote the majority opinion for the Court. Although he decided that the litigants had filed the appeal in a timely manner, he ruled that the only litigant who presented the Court with the occasion for anything other than an unwarranted advisory opinion was George P. Poole.

Poole worked as a roller at the U.S. Mint and clearly acknowledged that he had engaged in partisan political activities (other litigants had indicated only that they wanted to do so). Poole’s right and those of other federal employees to free expression were not absolute, but they had to be weighed against “the requirements of orderly administration of administrative personnel.” Employees did, however, continue to exercise the right to vote.

Justice Frankfurter wanted to dismiss the case for lack of jurisdiction, but Justice Black authored a vigorous dissent. He observed that the act limited the rights of three million federal employees and thousands of state workers. He did not think the law was more narrowly drawn than one that would withdraw rights from all farmers or businessmen, for example. If the government feared that supervisors might use their power to coerce public employees into unwarranted political activities, Congress should address this issue more directly.