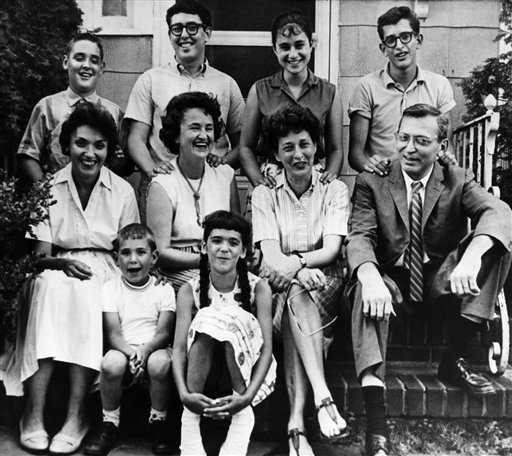 This 1962 photo shows some of the parents and children who brought suit against public schoolroom prayer in Engel v. Vitale (1962). In this case, the Supreme Court said the prayer violated the First Amendment.  (AP Photo, used with permission from the Associated Press)

In Engel v. Vitale, 370 U.S. 421 (1962), the Supreme Court ruled that school-sponsored prayer in public schools violated the establishment clause of the First Amendment. The case involved a 22-word nondenominational prayer recommended to school districts by the New York Board of Regents: “Almighty God, we acknowledge our dependence upon Thee, and we beg Thy blessings upon us, our parents, our teachers and our Country.”

The Union Free School District in New Hyde Park, N.Y., adopted the recommendation and instituted a practice whereby teachers led students in the prayer every morning. The practice was voluntary, and students could be excused without punishment upon written request from their parents.

Engel and the others appealed to the U.S. Supreme Court, which ruled in favor of the parents in a 6-1 vote (Justices Felix Frankfurter and Byron R. White did not participate).

Supreme Court struck down the prayer

Writing for the majority, Justice Hugo L. Black focused on the history of religious discrimination and intolerance in England and the early Colonial days of the United States. This history, according to Black, showed that by the time of the adoption of the U.S. Constitution Americans had a “widespread awareness . . . of the dangers of a union of Church and State.”

Black did not cite a single U.S. Supreme Court case in the text of his majority opinion, although he cited Everson v. Board of Education (1947) in a footnote. Instead, he cited a variety of secondary sources on the history and struggle for religious liberty. According to Black, “the First Amendment was added to the Constitution to stand as a guarantee that neither the power nor the prestige of the Federal Government would be used to control, support or influence the kinds of prayer the American people can say.”

Black concluded that “government in this country should stay out of the business of writing or sanctioning official prayers and leave that purely religious function to the people.”

Justice William O. Douglas wrote a concurring opinion, contending that “once government finances a religious exercise it inserts a divisive influence into our communities.”

Justice Potter Stewart wrote the lone dissent. He argued that the majority “misapplied a great constitutional principle” and denied public schoolchildren “the opportunity of sharing in the spiritual heritage of our Nation.” He noted that history and tradition showed many religious influences and elements in society, such as “In God We Trust” on the nation’s money, opening sessions of the Supreme Court with “God Save This Honorable Court,” the opening prayers in Congress, and the many acknowledgments of God by various presidents in public speeches.

The decision caused outrage among many and harsh criticism of the Warren Court. Engel said that he and his family members suffered obscene phone calls, taunts, and community ostracism.

The decision led the Court to strike down similar school-sponsored prayers in the consolidated cases of Abington School District v. Schempp and Murray v. Curlett (1963).

Principles of Engel have been extended to other cases

The principles of Engel have been extended by Court decisions invalidating an Alabama law requiring a moment of silence that appeared to have been rewritten specifically to encourage school prayer in Wallace v. Jaffree (1985), a middle school graduation school prayer in Lee v. Weisman (1992), and prayer at high school football games in Santa Fe Independent School District v. Doe (2000).