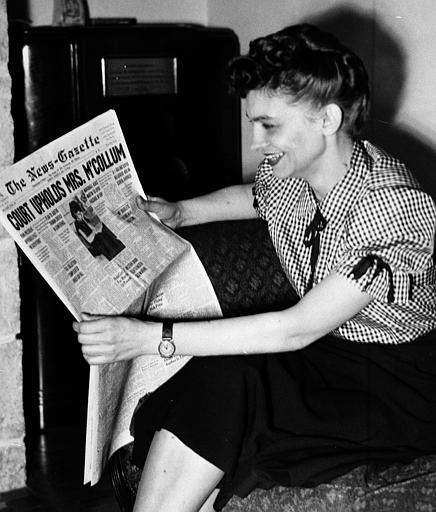 Vashti McCollum reading about her Supreme Court victory in 1948. McCollum objected to the Champaign Board of Education in Illinois allowing religious teachers to come into public schools to provide religious training. The Supreme Court overturned the program and held that the practice violated the establishment clause of the First Amendment (AP Photo, used with permission from the Associated Press.)

The Champaign Board of Education in Illinois had allowed religious teachers to come into public schools during regular school hours to provide religious training for students whose parents had agreed to it. Vashti McCollum, a taxpayer whose son was enrolled in the schools, objected to the exercises, but lower courts had decided that the practice violated neither the state nor the federal constitution.

Justice Hugo L. Black, writing the opinion for the Court, argued that the practice violated the principles established in Everson v. Board of Education (1947), which had affirmed the need to erect a “high and impregnable” wall of separation between church and state. Rather than evidencing “hostility to religion,” Black said that the First Amendment rested “upon the premise that both religion and government can best work to achieve their lofty aims if each is left free from the other within its respective sphere.” In this case, the state was using tax-supported buildings and compulsory attendance laws to provide students with religious classes.

Justice Felix Frankfurter wrote a separate opinion, joined by Justices Robert J. Jackson and Wiley B. Rutledge, in which he reviewed the history of education in the United States and the development of released time programs. He pointed out that they were designed for “sectarian teaching” and relied on “inherent pressure by the school system in the interest of religious sects.” He did mention the possibility of a “dismissed time” program off school grounds, which the Court subsequently approved (over Frankfurter’s dissent) in Zorach v. Clauson (1952).

Jackson wrote a separate concurring opinion, somewhat questioning the Court’s jurisdiction in this case and expressing concern about too closely supervising local school boards. He feared that the Court was “likely to make the legal ‘wall of separation between church and state’ as winding as the famous serpentine wall designed by Mr. Jefferson for the University [of Virginia] he founded.”

Justice Stanley F. Reed authored a vigorous dissent emphasizing that the school had elicited parental consent to its religious programs. He observed that, in founding the University of Virginia, Thomas Jefferson had approved programs whereby students would worship in religious schools near the university. Questioning the wall of separation analogy, he warned that “A rule of law should not be drawn from a figure of speech.”

He also questioned the applicability of James Madison’s “Memorial and Remonstrance Against Religious Assessment” to public education. He did not think that the school program constituted the kind of state “aid” that Everson had been designed to prevent. He thought the Court could distinguish programs that were “ceremonial and compulsory” and thereby prohibited from those that were “voluntary and educational” and should not be.

Pointing to various accommodations with religion, Reed argued that the establishment clause was not “an absolute prohibition against every conceivable situation where the two may work together, any more than the other provisions of the First Amendment — free speech, free press — are absolutes.” Referring to established practices, he concluded that “Devotion to the great principle of religious liberty should not lead us into a rigid interpretation of the constitutional guarantee that conflicts with accepted habits of our people.”

In Zorach the Supreme Court ruled that schools could dismiss children from classrooms to participate in religious instruction in off-campus settings.