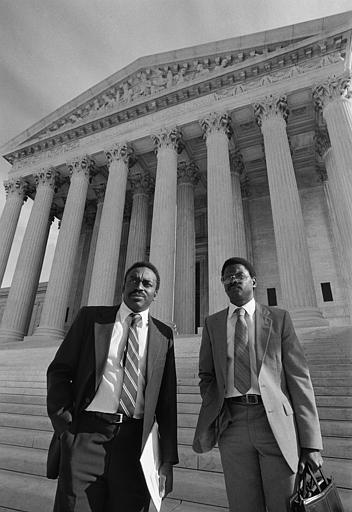 Self-described agnostic Ishmael Jaffree of Mobile, Alabama, left, and his attorney Ronnie Williams, pause on the steps of the U.S. Supreme Court building after the court heard arguments on the legality of an Alabama law allowing public school students to begin each day with a moment of silence in 1984. Jaffree had challenged the law. In 1985, the Supreme Court overturned the law as a violation of the establishment clause of the First Amendment, finding the law had a religious purpose and was intended to support religion. (AP Photo/J. Scott Applewhite, used with permission from the Associated Press)

In Wallace v. Jaffree, 472 U.S. 38 (1985), the Supreme Court struck down as a violation of the establishment clause a “one minute period of silence” that the Alabama legislature prescribed for its public schools at the start of each day.

This case is important as one of several cases limiting the scope of state or government-directed prayer in public schools. Further, Justice William H. Rehnquist’s significant dissent offered a competing interpretation of the establishment clause.

Decisions such as Engel v. Vitale (1962), in which the Court struck down a law mandating that a public school day should begin with the reading of a “non-sectarian” prayer in class, were — and remain — controversial. Many people viewed these decisions as “taking God out of the schools,” hostility to religion, the cause of the undermining of school discipline, or the loss of morality in society.

Following Engel and other cases such as Abington School District v. Schempp (1963), many school districts sought to reinstate prayer or some type of religious education into public schools. Such was the case in Alabama.

Alabama mandated moment of silence that could be used for prayer

The moment of silence in Alabama schools could be used for prayer, silent meditation, or whatever the students preferred. For some, this moment of silence lacked the coerciveness of a read prayer requiring active participation. Supporters argued that during this meditation minute, no one would know if a student was praying or doing something else. Despite this claim, a divided Supreme Court struck down the minute of silence.

The majority opinion, written by Justice John Paul Stevens, referred to the records of the Alabama legislature, Sen. Donald Holmes, the sponsor of the law authorizing the moment of silence, had inserted into the legislative record — apparently without dissent — a statement indicating that the measure was a step in an “effort to return voluntary prayer” to the public schools.

Citing this legislative intent and history, Stevens reasoned that the law failed the Lemon test that the Court had established in Lemon v. Kurtzman (1971). First, the law clearly was not secular in its intent, but rather it had a religious purpose. Second, the law was not neutral — its aim was to support religion.

Conversely, Rehnquist in dissent saw this silent moment as lacking the coerciveness of the school-sponsored prayers struck down in Engel.

He also used the occasion to argue that past establishment clause rulings based on a wall of separation between church and state were erratic, that the application of the Lemon test was inconsistent, and that many rulings supported some type of state-church interaction in the schools. According to Rehnquist, governments do not violate the establishment clause unless they attempt to establish an official religion or show preference to one religious group over another.

Rehnquist’s test was later embraced by several members of the Rehnquist and Roberts Courts, including Justices Antonin Scalia and Clarence Thomas.