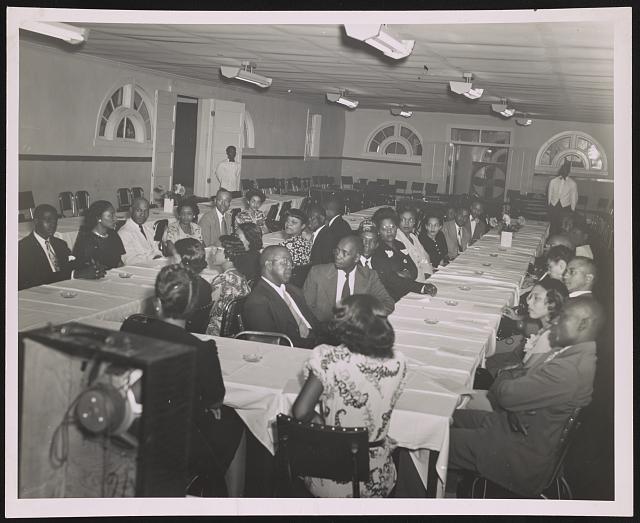 In NAACP v. Alabama, 357 U.S. 449 (1958), the Supreme Court unanimously ruled that the First Amendment protected the free association rights of the National Association for the Advancement of Colored People (NAACP) and its rank-and-file members. When this case was decided, the NAACP was one of the few, if not only, active civil rights organizations in the South. Thus, this case allowed the only operative civil rights organization to exist in the South, with a minimum level of protection from intimidation. This image shows a Montgomery, Alabama branch, NAACP meeting, about 1947. (Image via Library of Congress)

In NAACP v. Alabama, 357 U.S. 449 (1958), the Supreme Court unanimously ruled that the First Amendment protected the free association rights of the National Association for the Advancement of Colored People (NAACP) and its rank-and-file members.

The case challenged Alabama’s foreign corporation statute, which gave state authorities the power to probe unincorporated organizations or organizations that were not officially registered with the state. Although the NAACP established a local affiliate in Alabama as early as 1918 and created a regional office in the state in 1951, it was officially incorporated at its national office in New York.

Beginning in 1956, in response to Brown v. Board of Education (1954), Alabama authorities used the foreign corporation law aggressively to investigate the NAACP. The civil rights organization complied with the state’s initial request to hand over its business records, including its charter and list of organizational officers and staff. However, because of confidentiality and potential reprisal attacks, the NAACP refused to hand over its lists of rank-and-file members.

The NAACP’s legal team, led by Robert L. Carter, a future U.S. district court judge, argued that publicizing the lists would invite repression and economic reprisals against NAACP members. Civil rights activists believed this would dissuade present members and potential recruits from associating with the organization, which violated their constitutional rights of association and assembly. An Alabama circuit court levied a fine against the NAACP and threatened additional penalties if it continued to withhold the lists; Alabama’s Supreme Court first dismissed the NAACP suit on the basis that its allegations were insufficient and then rejected another appeal on procedural grounds.

Justice John Marshall Harlan II issued the opinion for the Court, explaining that the right of association and assembly, although spelled out in the First Amendment, “is [also] an inseparable aspect of the ‘liberty’ ” that is protected by the due process clause of the Fourteenth Amendment. Accordingly, the Supreme Court’s decision expanded the scope of the rights of association and assembly to prevent states such as Alabama from discouraging citizens from participating in groups that were engaged in lawful and ethical activities.

Prior to this case the Court supported efforts by federal and state governments to investigate organizations that were alleged to be involved in subversive and unlawful activities. In two decisions, New York ex rel. Bryant v. Zimmerman (1928) and Dennis v. United States (1951), the Court had ruled in favor of government efforts to curtail the rights of assembly and speech of the Ku Klux Klan (KKK) and the Communist Party.

Court said NAACP did not cause harm to government or society; allowed only civil rights organization in the South to exist

The NAACP case differed because the type of activities it was involved in did not cause harm to the government or society. Harlan stated that unlike the KKK in the Zimmerman case, the NAACP complied with much of the government’s request to hand over its business records. Membership lists, however, had to remain confidential to protect its members from unlawful attacks.

This article was originally published in 2009. Dr. Sekou Franklin is an Associate Professor in the Department of Political Science at Middle Tennessee State University. He is the author of After the Rebellion: Social Movement Activism and Popular Mobilization among the Post-Civil Rights Generation (NYU Press, 2014), co-author of Losing Power: African Americans and Racial Polarization in Tennessee Politics (University of Georgia Press, 2020), and editor of State of Blacks in Middle Tennessee (Urban League of Middle Tennessee, 2010/2011). Currently, he is the President of the National Conference of Black Political Scientists.