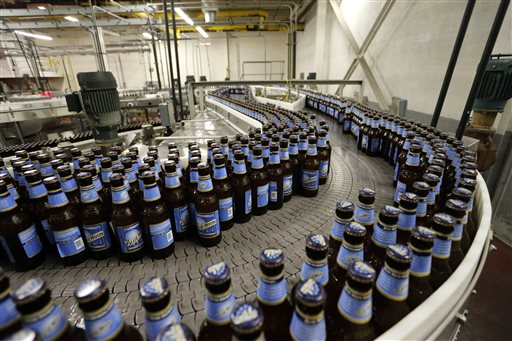 The federal government cannot restrict what information is displayed on beer labels, the Supreme Court ruled in 1995 in Rubin v. Coors Brewing Co. The court invalidated a federal law that restricted beer companies from putting the alcohol content on labels, saying it was an infringement on commercial speech that is protected under the First Amendment. (Here, a conveyer belt carries newly filled and labeled bottles of Blue Moon beer, a craft-oriented beer produced at the MillerCoors Brewery in Golden, Colo. AP Photo/Brennan Linsely, used with permission from The Associated Press.)

The case was one of several Supreme Court decisions in the 1990s that increased First Amendment protection for commercial speech.

The Federal Alcohol Administration Act of 1935 prohibited beer labels from displaying alcohol content. Coors petitioned for a declaratory judgment that the ban was unconstitutional. The lower courts agreed.

The doctrine states that commercial speech — generally defined as speech that does no more than propose a commercial transaction — enjoys First Amendment protection but can be regulated under some circumstances.

The Court applied the test developed in Central Hudson Gas and Electric Corp. v. Public Service Commission (1980), which requires that government regulation of commercial speech that concerns lawful activity and is not misleading must:

The Court agreed that the government’s interest in preventing a “strength wars” advertising or labeling campaign was substantial. Advertising and labeling that promoted the strength of beer “could lead to greater alcoholism and its attendant social costs,” wrote Thomas.

The Court was not convinced, however, that the ban directly advanced that interest and was no more extensive than necessary. Thomas noted that the very same act required labeling of alcoholic content on liquor and wine. It also allowed states to regulate whether alcoholic content could be disclosed in advertising.

This “unique and puzzling regulatory framework ensures that the labeling ban will fail to achieve [the prevention of strength wars].” Nor could the government produce any evidence that there was or had been strength wars promoting the alcoholic content of beer.

Finally, said Thomas, even if the case could be made that there was a direct connection between the regulation and the government interest, the regulation would fail because there were alternatives that regulated speech less extensively that could accomplish the same thing.

The government could directly regulate the alcoholic content of beer and not impose any speech restrictions, or it could prohibit marketing campaigns that emphasized strength. In his concurring opinion, Justice John Paul Stevens argued that the case should not have been decided using commercial speech doctrine and should have been decided using traditional First Amendment doctrine.