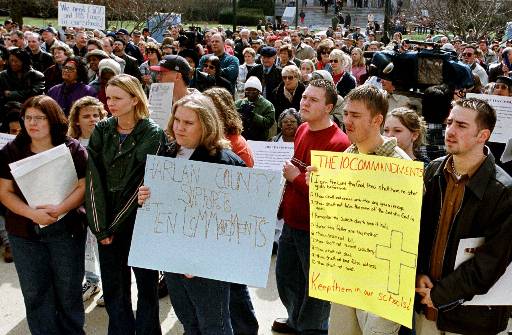 After the Supreme Court ruling in Stone v. Graham that invalidated a Kentucky law requiring public schools to post the Ten Commandments, state legislatures moved to adopt laws to allow Ten Commandment displays in public spaces under certain circumstances. For example, Kentucky in 2000 passed a law allowing posting of Ten Commandments in public classrooms when incorporated into a historical display. In this 2000 photo, students from Harlan County, Kentucky, hold signs about the Ten Commandments to show their support during a rally at the State Capitol. (AP Photo/John Sommers II, used with permission from the Associated Press)

In Stone v. Graham, 449 U.S. 39 (1980), the Supreme Court ruled that a Kentucky law that required the posting of the Ten Commandments on the wall of every public school classroom in the state violated the establishment clause of the First Amendment because the purpose of the display was essentially religious.

The Kentucky law, adopted in 1978, was challenged by a group of parents and children representing different religions.

The Kentucky courts upheld the law, but the Supreme Court reversed. In determining whether the law had the effect of establishing religion, the Court applied the test from Lemon v. Kurtzman (1971) and concluded that the required display of the Ten Commandments in schoolrooms served a religious purpose.

“The Ten Commandments are undeniably a sacred text in the Jewish and Christian faiths, and no legislative recitation of a supposed secular purpose can blind us to that fact," the Court wrote.

Ruling was unsigned opinion on basis of petition

The Court’s ruling, reversing the Kentucky Supreme Court, was unusual because it was issued in an unsigned opinion on the basis of the petition without waiting for full briefs and oral argument. This type of summary reversal in a per curia opinion is often reserved for cases in which the Court believes the outcome is obvious as a matter of law and requires no further argument.

But in this case four justices voted against the Court’s action. Chief Justice Warren E. Burger and Justice Harry A. Blackmun thought the Court should hear oral argument, and Justice Potter Stewart stated briefly that he saw no reason to reverse the Kentucky court’s ruling. Justice William H. Rehnquist wrote a dissenting opinion. The private papers of the Supreme Court justices later revealed that the decision was written by Justice William J. Brennan Jr.

Stone v. Graham stood as the Supreme Court’s only pronouncement on the display of the Ten Commandments in public places for 25 years.

In both cases, the Supreme Court said the Stone ruling was still valid and that the context of the Ten Commandments in school classrooms required more care to avoid violations of the establishment clause than displays in other public places.