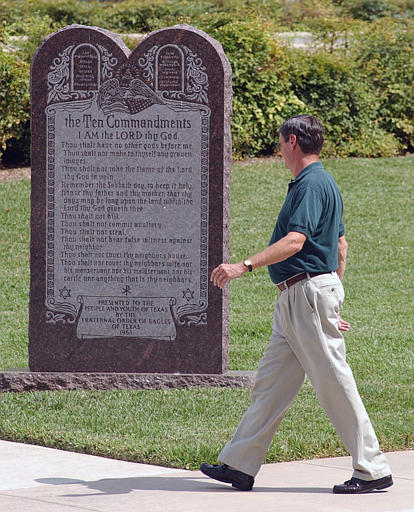 In Van Orden v. Perry, 545 U.S. 677 (2005), the Supreme Court ruled 5-4 that a monument depicting the Ten Commandments in an Austin, Texas, public park did not violate the establishment clause of the First Amendment. In this photo, Darrell E. Way, a visitor to the Capitol, walks past a stone bearing the Ten Commandments on Friday, Sept. 4, 2002, in Austin, Texas. A federal judge has ruled that the stone slab with the Biblical passage near the state Capitol building does not violate the constitutional separation of church and state. Way is from Katy, Texas. (AP Photo/Harry Cabluck, used with permission from the Associated Press)

In Van Orden v. Perry, 545 U.S. 677 (2005), the Supreme Court ruled 5-4 that a monument depicting the Ten Commandments in an Austin, Texas, public park did not violate the Establishment Clause of the First Amendment. The case was decided the same day as another Ten Commandments case, McCreary County v. American Civil Liberties Union (2005). Both decisions reveal how divided the Court is on this contentious issue.

In Van Orden, the Ten Commandments monument stood on the grounds between the Texas state capitol building and the state supreme court building. The monument was one of several scattered around the capitol grounds, and its location did not draw special attention to it. The monument was donated in 1961 by the Fraternal Order of Eagles, who paid the cost of placing it in the park. There was little evidence of legislative intent, and there was no evidence of the kind of religion-based motivations evident in McCreary County, in which the Court considered displays of the Ten Commandments in two Kentucky county courthouses.

In his case, Austin resident Thomas Van Orden, formerly a licensed lawyer, contended that the Ten Commandments display violated the establishment clause. But both a federal district court and a federal appeals court rejected his claim. The Supreme Court narrowly affirmed the lower-court rulings in a plurality opinion by Chief Justice William H. Rehnquist.

Rehnquist’s opinion began by asserting that the establishment clause had a dual nature. It recognized both “the strong role” religion has played throughout U.S. history, and it recognized concerns about the separation of church and state. The plurality did not apply either the Lemon test or the endorsement test, which were commonly employed in establishment clause cases. Rather, it focused on the “unbroken history of official acknowledgments by all three branches of government of the role of religion in American life,” as asserted in Lynch v. Donnelly (1984).The plurality argued that this history, along with earlier cases, provided evidence that the Ten Commandments could have a secular meaning based on the its historical role in U.S. law and culture.

In both Van Orden and McCreary County, eight justices split 4-4. Justice Stephen G. Breyer provided the deciding vote to uphold display of the monument in the Texas case and invalidate the displays in the Kentucky case.

First, he viewed this case as a “borderline” one in which no legal test could be appropriately applied.

Second, Breyer, like the plurality, found that the purpose of the establishment clause is to maintain some level of separation between church and state while avoiding hostility to religion—although it seems clear that Breyer weighed these factors differently than the other four.

Third, Breyer asserted that avoiding religious divisiveness is a major goal of the establishment clause. Therefore, the type of religious purpose on view in McCreary County was unconstitutional, but so would be attempts by the government to remove all religious symbolism from the “public sphere.”

About the Ten Commandments itself, Breyer argued that its message, while religious, can represent “a secular moral message” and in some contexts “a historical message.” He used these potential secular messages, in light of the physical and historical context of the monument, to argue that the display in this case was meant to reflect Texas’s moral and historical traditions and not religion per se. The potential conflicts between this case and McCreary County will apparently be left to the lower courts to sort out.

This article was originally published in 2009. Frank S. Ravitch is Professor of Law and Walter H. Stowers Chair in Law in Religion at the Michigan State University College of Law. He is the author of several books, including Freedom’s Edge: Religious Freedom, Sexual Freedom, and the Future of America (Cambridge University Press, 2016), Masters of Illusion: The Supreme Court and the Religion Clauses (NYU Press 2007), and School Prayer and Discrimination: The Civil Rights of Religious Minorities and Dissenters (Northeastern University Press, 1999). He is co-author of the first comprehensive treatise on Law and Religion in more than one hundred years, Religion and the State in American Law (Cambridge University Press 2015). His articles have primarily focused on law and religion in the U.S. and Japan, but he has also written about civil rights law and disability discrimination. He has also authored a number of amicus briefs to the U.S. Supreme Court.