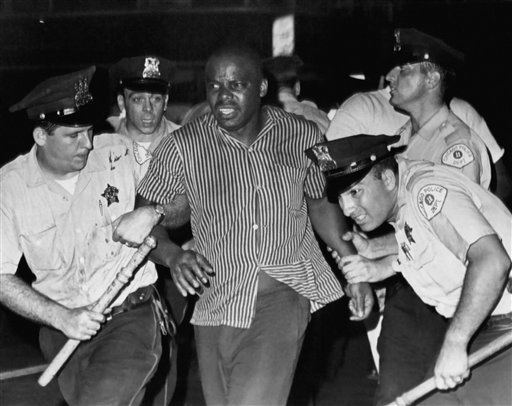 In Boyle v. Landry, 401 U.S.77 (1971), decided the same day as Younger v. Harris (1971) and other related cases, the Supreme Court reversed injunctions against enforcement of Illinois statutes and Chicago ordinances prohibiting “mob action, resisting arrest, aggravated assault, aggravated battery, and intimidation.” In this photo, 5 policemen propel an arrested African American rioter toward a police van as they battled demonstrators a second consecutive night in a west side African American neighborhood in Chicago on August 14, 1965. (AP Photo/Larry Stoddard, used with permission from the Associated Press)

In rejecting the appeal, Justice Hugo L. Black found that “the allegations of the complaint in this case fall far short of showing any irreparable injury from threats or actual prosecutions under the intimidation statute or from any other conduct by state or city officials.” He observed that the state had not prosecuted any of the citizens who were bringing the complaint, and they had shown no likelihood of “bad faith prosecutions” or any “irreparable injury if the State is left free to prosecute under the intimidation statute in the normal manner.”

Citing both Younger and Samuels v. Mackell (1971), Black concluded that “the normal course of state criminal prosecutions cannot be disrupted or blocked” by allegations that “amount to nothing more than speculation about the future.” He continued, “The policy of a century and a half against interference by the federal courts with state law enforcement is not to be set aside on such flimsy allegations as those relied upon here.”

Overall, like Younger, Boyle represents the deference the federal courts will give to pending state criminal proceedings, even when a First Amendment question is at issue.