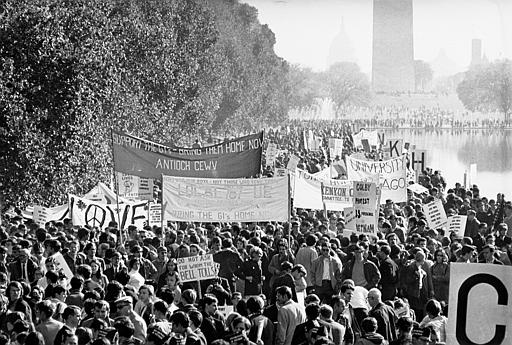 During a protest near the Washington Monument in August 1966, an anti-war protester was arrested after he was overheard saying if he were drafted into Vietnam and forced to carry a rifle, the first person in his sights would be President Lyndon B. Johnson. He was convicted of the federal crime of threatening the president. The Supreme Court ruled that his comments were crude political hyperbole, not a true threat. (In this photo, people gather to protest the Vietnam War in Washington D.C. on Oct. 21, 1967, AP Photo, used with permission from The Associated Press.)

In Watts v. United States, 394 U.S. 705 (1969), the Supreme Court held, without the benefit of oral argument, that the First Amendment does not protect true threats. The Court also explained that political hyperbole does not qualify as such a threat.

'If they ever make me carry a rifle the first man I want to get in my sights is L.B.J.'

In August 1966, an 18-year-old African American war protestor, Robert Watts, attended an anti-war rally at the Washington Monument. During a small discussion group designed to discuss the problem of police brutality, Watts allegedly said: “They always holler at us to get an education. And now I have already received my draft classification as 1-A and I have got to report for my physical this Monday coming. I am not going. If they ever make me carry a rifle the first man I want to get in my sights is L.B.J. . . .They are not going to make me kill my black brothers.”

An investigator for the Army Counter Intelligence Corps overheard Watts’s intemperate remarks, which led to his arrest for violating a federal law prohibiting threats against the president. A federal jury convicted Watts of violating the statute, and a divided District of Columbia Circuit Court of Appeals affirmed.

On further appeal, the Supreme Court reversed in a 5-4 per curiam opinion. The majority determined that the federal statute prohibiting threats against the president was constitutional and that true threats receive no First Amendment protection.

However, the majority also determined that Watts’s crude statements were political hyperbole rather than true threats. “What is a threat must be distinguished from what is constitutionally protected speech,” the majority wrote. “The language of the political arena ... is often vituperative, abusive, and inexact.”

The Court agreed with Watts’s counsel’s characterization of Watts’s speech as “a kind of very crude offensive method of stating a political opposition to the President” that did not qualify as a true threat.

Justice William O. Douglas concurred in an opinion that would have gone further than the per curiam majority opinion and invalidated the federal statute. “Suppression of speech as an effective police measure is an old, old device, outlawed by our Constitution,” he concluded. Justice Abe Fortas, joined by John Marshall Harlan, dissented in a very short opinion questioning whether the Court should have taken the case.

Watts remains an important decision for First Amendment jurisprudence because it stands for the principle that true threats are not protected expression. The Watts factors are the three factors used by the Court in separating free speech from true threats.

Unfortunately, in Watts the Court did not establish a clear definition of what speech constitutes a true threat, leaving theea lower courts to develop different tests.