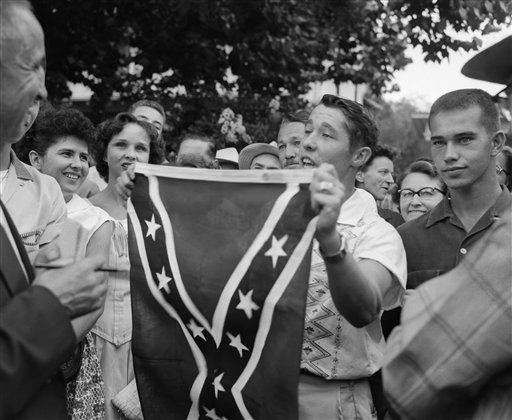 Opposition to school desegregation ran high in Little Rock, Arkansas, in 1957 as the school system began to integrate. In 1958, the Arkansas legislature passed a series of anti-integration measures, including requiring all public school teachers to submit any organizations to which they belonged. The Supreme Court invalidated the law in Shelton v. Tucker (1960) saying that it violated the First Amendment right of association. In this photo, Paul Davis Taylor displays a Confederate flag in front of Little Rock Central High School in 1957. (AP Photo, used with permission from the Associated Press)

In Shelton v. Tucker, 364 U.S. 479 (1960), the Supreme Court overturned an Arkansas law requiring as a condition of employment that schoolteachers submit an annual accounting of any organizations that they had belonged to or contributed to in the preceding five years.

The law in question, Law 10, had been passed along with a “loyalty oath” requirement by a special session of the 1958 Arkansas legislature as part of a package of anti-integration measures.

The overtly segregationist Citizen’s Council had sponsored the legislation, blatantly announcing that it would use it to rid public schools of employees who belonged to the National Association for the Advancement of Colored People (NAACP), the Urban League, or any other group that the council deemed controversial.

The Arkansas Supreme Court unanimously upheld the law in February 1960.

Shelton was heard in conjunction with Carr v. Young (No. 83).

B. T. Shelton, Max Carr, and Ernest T. Gephardt represented a group of teachers at the high school and college level who had joined with the Arkansas Teacher’s Association to challenge Law 10 by refusing to file the required affidavits. The challenge also had the full support of the Arkansas branch of the American Association of University Professors.

Shelton, who had been employed in the school system for 25 years, had never been a communist or socialist, but he was a member of the NAACP.

Carr, an associate professor of music at the University of Arkansas, and Gephardt, a printing instructor at Central High in Little Rock, testified that they had never been members of any subversive organizations. Nevertheless, like Shelton, they lost their jobs after refusing to sign the affidavit.

Writing for the 5-4 Court in Shelton, Justice Potter Stewart stated that the Arkansas law violated freedom of association under the First Amendment, which had been applied to the states through the due process clause of the Fourteenth Amendment.

The Court employed what became known as the least restrictive means test, which was cut from the same cloth as the more widely used vagueness test. Both tests require the courts to overrule laws that are written so broadly as to prohibit activities protected by the Constitution.

Although the Court acknowledged that Arkansas had a responsibility to consider the fitness of a teacher as well as his or her educational qualifications, the state had not, in the Court’s opinion, used the least dramatic means of accomplishing that goal in Law 10.

Subsequently, in NAACP v. Button (1963) the Court determined that to avoid the vagueness label, laws must be drawn with “narrow specificity.”

In Brown v. Socialist Workers ’74 Campaign Committee (1982), the Court again addressed the issue of disclosure when it overturned an Ohio law that had forced the state Socialist Party to report all campaign contributions. The justices determined that the law potentially placed those contributors in a position that made them vulnerable to threats, harassment, or reprisals.