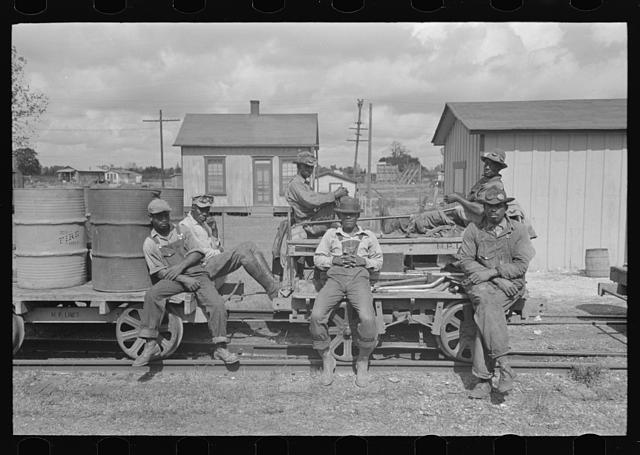 In Brotherhood of Railroad Trainmen v. Virginia ex rel. Virginia State Bar, 377 U.S. 1 (1964), the Supreme Court lifted an injunction against a railroad union on the basis that preventing union members from recommending legal counsel to one another violated their First and 14th Amendment freedoms of speech, petition, and assembly. (Image of railroad workers in Port Barre, Louisiana, 1938, via Library of Congress, public domain)

In Brotherhood of Railroad Trainmen v. Virginia ex rel. Virginia State Bar, 377 U.S. 1 (1964), the Supreme Court lifted an injunction against a railroad union on the basis that preventing union members from recommending legal counsel to one another violated their First and 14th Amendment freedoms of speech, petition, and assembly.

Railroad workers experienced a high rate of injuries, so the Brotherhood of Railroad Trainmen maintained a legal counsel department to advise injured workers and their families to consult certain “honest and competent” lawyers before settling claims. The state of Virginia considered this “unlawful solicitation of litigation and the unauthorized practice of law” on the part of the union and obtained an injunction, which the union appealed.

Writing for the majority in a 6-2 decision, Justice Hugo L. Black noted the railroad workers’ high injury rate and Congress’s efforts to protect them by adopting the Safety Appliance Act of 1893 and the Federal Employers’ Liability Act of 1908.

Black determined that the First Amendment secures employees’ rights of association “to gather together for the lawful purpose of helping and advising one another in asserting their rights.” Although Virginia has the right “to regulate the practice of law within its borders,” it cannot “foreclose the exercise of constitutional rights by mere labels.”

Black cited precedents to support the Court’s finding that the union had not practiced law illegally simply by recommending lawyers. In Gideon v. Wainwright (1963), the Court had established the difficulty of individuals representing themselves. Quoting from NAACP v. Button (1963), in which the Court ruled that the NAACP could urge legal action and provide legal counsel, Black wrote that the state had “failed to advance any substantial regulatory interest, in the form of substantive evils flowing from petitioner’s activities, which can justify the broad prohibitions which it has imposed.”

In his dissent, Justice Tom C. Clark, joined by John Marshall Harlan II, argued that the Court’s decision “overthrows state regulation of the legal profession and relegates the practice of law to the level of a commercial enterprise.”

Clark noted that the union president controlled the selection of attorneys and that, in the past, the union had taken twenty-five percent of the fees of attorneys it recommended. Virginia was not regulating “political expression” but providing “a procedure for the settlement of damage claims.” Clark feared that the decision “will bring disrepute to the legal profession,” an argument that would appear in later cases dealing with attorney advertising.

The Court has subsequently relied on this case to support similar rulings in United Mine Workers of America, District 12 v. Illinois State Bar Association (1967) and in United Transportation Union v. State Bar of Michigan (1971).