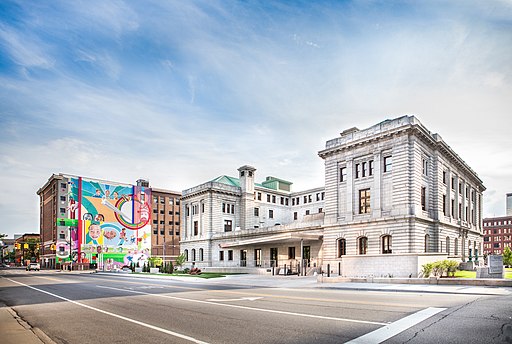 In a case involving faculty at Ferris State College in Michigan, the Supreme Court developed a three-part test to determine which activities a union could charge to nonunion members. (Photo of the Kendall College of Art and Design of Ferris State University, by KatieZychowski CC BY-SA 4.0)

Lehnert v. Ferris Faculty Association, 500 U.S.507 (1991), is one of many Supreme Court decisions that address the limits First Amendment protections for freedom of expression impose on the expenditure of contributions that states require nonunion members to pay to the union for benefits.

Michigan’s Public Employment Relations Act required James Lehnert and other members of Ferris State College to participate in an “agency-shop” arrangement whereby they paid a “service-fee” to the union that represented state employees, even though they were not members.

The Court previously had upheld some elements of this act in Abood v. Detroit Board of Education (1977), but in Railway Employees’ Department v. Hanson (1956) and International Association of Machinists v. Street (1961) it had limited the use of such contributions to nonpolitical purposes.

Looking at these cases, Justice Harry A. Blackmun, writing for the majority, formulated a three-part test to determine what activities a union could charge to nonunion members. This test required “that chargeable activities:

In applying this test, Blackmun found that the state could not require nonunion employees “to subsidize legislative lobbying or other political union activities outside the limited context of contract ratification or implementation.”

Blackmun decided that a union could charge nonunion members for “their pro rata share of the costs associated with otherwise chargeable activities of its state and national affiliates” without giving “a local union carte blanche to expend dissenters’ dollars for bargaining activities wholly unrelated to the employees in their union.”

He rejected union attempts to require nonmembers to support the cost of a Preserve Public Education Program that was not directly related to “the ratification or implementation of petitioners’ collective-bargaining agreement” or to “extra-unit litigation.” He struck down expenditures on public relations expenses while upholding assessments for information support services. By contrast, he upheld the chargeability of expenses incident to preparation for a strike, although he acknowledged that the state would not have permitted use of funds for the strike itself, which was illegal under state law.

Court continued to struggle with compelled speech through mandatory dues

Justice Thurgood Marshall wrote a partial concurrence and partial dissent in which he said that he would have upheld assessments for lobbying costs, public relations, litigation, and de minimus publication costs to explain this litigation.

In a partial dissent and concurrence, Justice Antonin Scalia (joined at some points by Justices Sandra Day O’Connor and David H. Souter), questioned the court’s three-part test and sought to justify only those dues that arose “solely from the union’s statutory duties.” He would thus not support public relations activities, lobbying expenses, the costs of sending delegates to national conventions, the costs of preparing for an illegal strike, or the like.

In another partial concurrence and partial dissent, Justice Anthony M. Kennedy questioned the “malleable” nature of the Court’s test. He agreed, however, that the strike preparation activities were “indistinguishable in substance from other expenses of negotiating a collective bargaining agreement.”