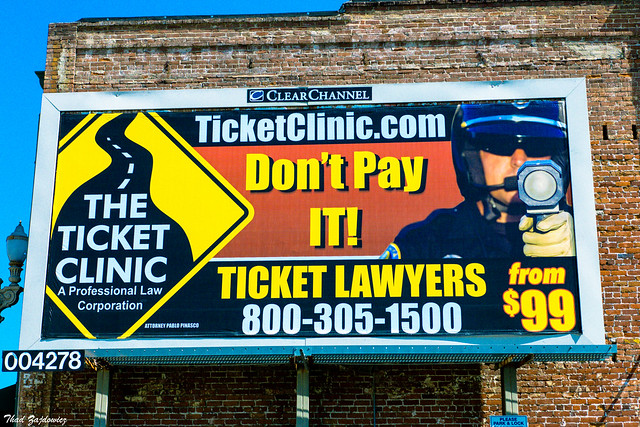 The Supreme Court held in Bates v. State Bar of Arizona, 433 U.S. 350 (1977), that attorney advertising was a form of commercial speech protected by the First Amendment. Thus Arizona bar officials could not punish two attorneys who truthfully advertised their routine legal services in a newspaper. (Image of attorney advertising via Thad Zajdowicz on Flickr, CC BY 2.0)

The Supreme Court held in Bates v. State Bar of Arizona, 433 U.S. 350 (1977), that attorney advertising was a form of commercial speech protected by the First Amendment. Thus Arizona bar officials could not punish two attorneys who truthfully advertised their routine legal services in a newspaper.

Bates and O'Steen advertised their legal services in the paper

Two young attorneys, John R. Bates and Van O’Steen, decided to advertise in order to attract more business in the competitive Phoenix market. According to their ad in the Arizona Republic, they were offering “legal services at very reasonable fees.” The ad also listed prices for various routine legal services, such as noncontested divorces.

Arizona bar said attorneys could not publicize themselves

The Arizona bar charged the attorneys with violating an attorney disciplinary rule: “a lawyer shall not publicize himself ... through newspaper or magazine advertisements ... or other means of commercial publicity.” A reviewing committee recommended that Bates and O’Steen be suspended for six months each, but the board of governors recommended only a one-week suspension.

Bates and O’Steen, with legal assistance from their former constitutional law professor at Arizona State, William Canby (he later became a judge on the 9th U.S. Circuit Court of Appeals), appealed to the Arizona Supreme Court, arguing that the advertising ban violated antitrust law and the First Amendment. The state high court rejected both claims.

On appeal, the U.S. Supreme Court unanimously rejected the attorneys’ antitrust claim, but five members of the Court accepted their First Amendment arguments. Writing for the majority, Justice Harry A. Blackmun reasoned that the attorney advertising at issue in this case was similar to the pharmacy advertising approved by the Court in Virginia State Board of Pharmacy v. Virginia Citizens Consumer Council, Inc. (1976), the decision that firmly established that commercial speech was entitled to a degree of First Amendment protection.

The Arizona bar offered numerous justifications for the ban on attorney advertising. Among others, attorney ads would have an “adverse effect on professionalism,” would be “inherently misleading,” would negatively affect the “administration of justice,” would have “undesirable economic effects,” would harm the quality of legal services, and would be difficult to police.

Blackmun rejected all these contentions, writing that none of them rose “to the level of an acceptable reason for the suppression of all advertising by attorneys.” He noted that the restriction on any attorney advertising had “served to burden access to legal services, particularly for the not-quite-poor and the unknowledgeable.”

Chief Justice Warren E. Burger and Justices Lewis F. Powell Jr. and William H. Rehnquist each wrote dissenting opinions. Burger warned that the majority’s decision “will only breed more problems than it can conceivably resolve.” Powell, joined by Potter Stewart, opined that the decision “will effect profound changes in the practice of law, viewed for centuries as a learned profession.”

Rehnquist, who had dissented in Virginia State Board of Pharmacy, again disagreed with granting constitutional protection to advertising: “I continue to believe that the First Amendment speech provision, long regarded by this Court as a sanctuary for expressions of public importance or intellectual interest, is demeaned by invocation to protect advertisements of goods and services.”

Powell was prescient in at least one regard; the Bates decision did work “profound changes,” and attorney advertising has become commonplace in various media.