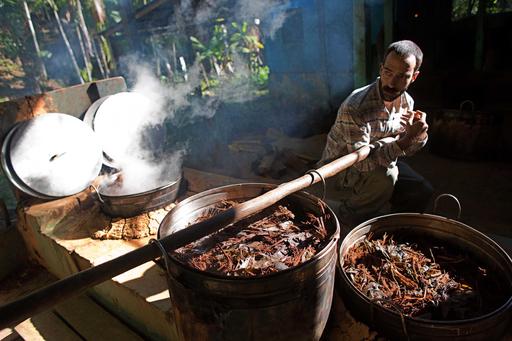 A man brews psychedelic ayahuasca tea in 2016 in Brazil. American members of the Brazlian UDV church drink a similar hallucinogenic tea in their religious rituals. The Supreme Court upheld their right to drink the tea in Gonzales v. O Centro Espirita Beneficente Uniao Do Vegetal (2006). (AP Photo/Eraldo Peres, used with permission from the Associated Press.)

In Gonzales v. O Centro Espirita Beneficente Uniao Do Vegetal, 546 U.S. 418 (2006), the Supreme Court unanimously upheld the sacramental use of a hallucinogenic substance under the First Amendment free exercise clause.

Hoasca, a tea containing a hallucinogen, is taken during religious ceremonies by members of the União Do Vegetal (UDV), a church from Brazil with about 130 members in the United States.

The case pitted the Religious Freedom Restoration Act of 1993 (RFRA) against the Controlled Substances Act. Congress had passed RFRA in response to Employment Division, Department of Human Resources of Oregon v. Smith (1990), in which the Court rejected its own “compelling interest” test enunciated in Sherbert v. Verner (1963) and Wisconsin v. Yoder (1972) for free exercise cases.

Congress passed RFRA to restore the Sherbert test, which states that the government could only interfere with a person’s free exercise of religion if it could demonstrate a compelling interest for doing so. Congress instructed the federal government to resume use of the compelling interest test after the Supreme Court struck down the portion of RFRA mandating the same standard for state government in City of Boerne v. Flores (1997).

Writing for a unanimous Court, Chief Justice John G. Roberts Jr. rejected all three of the government’s reasons for attempting to prohibit the sacramental tea:

Applying the compelling interest test as required by RFRA, the Court concluded that denial of access to hoasca placed a substantial burden on the practice of the UDV religion and that the government had not demonstrated a sufficiently compelling reason to interfere with the UDV’s religious freedom on the basis of health or recreational concerns.

Roberts argued that RFRA places in the courts’ hands the task of determining when exceptions to laws are warranted. He noted that the Controlled Substances Act in fact provided for waivers and that an exception was already in place for religious use of peyote by “every recognized Indian Tribe.”

Roberts noted that while the UN Convention did apply to hoasca, this in itself did not represent a compelling interest for rejecting a UDV exception, observing that such difficulties were among the reasons the Court had rejected the compelling interest standard in Smith in the first place.

Amicus briefs in support of the UDV were filed by both liberal and conservative religious advocacy groups, and the UDV victory was hailed as a vindication for the compelling interest standard.