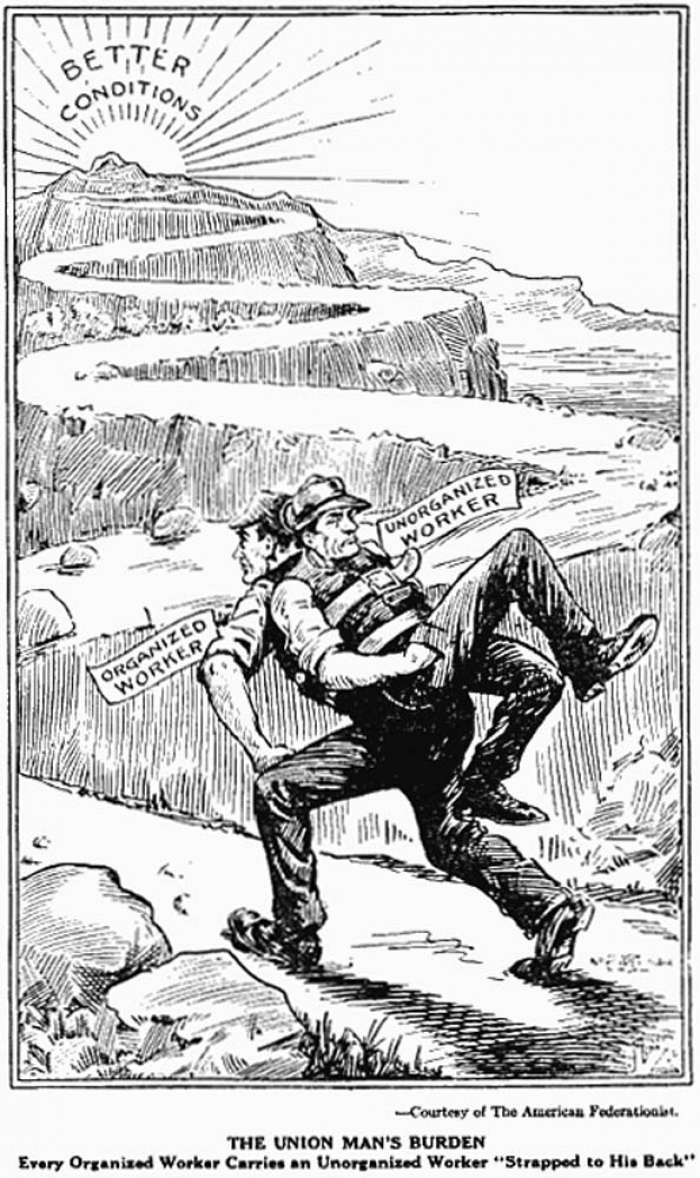 The American Federation of Labor challenged the so-called "right to work" amendment adoped in 1946 to the Arizona constitution that prohibited discrimination against nonunion members in hiring decisions. The union organization argued, among other things, that it violated the First Amendment because it denied employers, labor unions or members of labor unions freedom of speech, assembly and petition. The Supreme Court disagreed in its 1949 ruling in AFL v. American Sash and Door Company. (This 1922 cartoon, which appeared in AFL's American Federationist, reflects the union's views about workers who are non-union.)

In American Federation of Labor v. American Sash and Door Co., 335 U.S. 538 (1949) — issued the same day as Lincoln Federal Labor Union v. Northwestern Iron and Metal Co. and Whitaker v. North Carolina — the Supreme Court upheld a right-to-work amendment to the Arizona constitution, which had prohibited discrimination against nonunion members (including their exclusion from employment), against constitutional challenges, including First Amendment claims.

In so ruling, the Supreme Court affirmed a federal district court decision dismissing a plea brought by unions, a union official, and an employer.

Justice Hugo L. Black, in the majority opinion, observed that the Arizona measure was basically covered by the rationale in Lincoln Federal, which rejected challenges to right-to-work laws under First Amendment speech, assembly, and petition claims, the contract clause, and the due process clauses, except that Arizona had not also explicitly adopted similar rules to protect union workers.

Black did not think this difference resulted in a denial of equal protection of the laws for union workers. He observed that other cases had established that states could address one set of evils without addressing them all.

Justice Felix Frankfurter wrote a concurring opinion in which he reviewed the history of past Court pronouncements on economic matters and concluded that the justices should generally defer to such judgments.

He specifically observed that the matter at hand was not “like censorship of the press or separation of Church and State, on which history, through the Constitution, speaks so decisively as to forbid legislative experimentation.”

Justice Wiley Rutledge wrote a separate concurrence, indicating that he did not think the Court’s decisions of the day necessarily answered the issue as to whether unions could call strikes in order “not to work with nonunion men.”