By Alex Aichinger
Related cases in Signs, Billboards and Newsracks 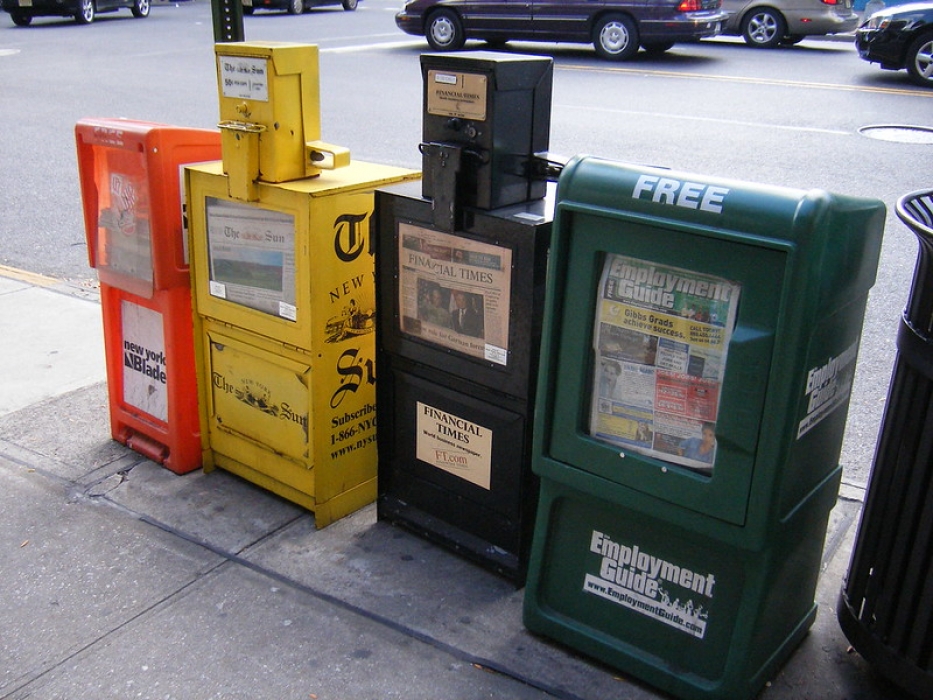 The Supreme Court in 1988 invalidated a city's news rack licensing scheme that gave the mayor discretion on who received licenses. Justice William Brennan said the "unbridled discretion in the hands of a government official or agency constitutes prior restarint and may result in censorship." (Image of coin operated newspaper vending machines on New York's Time Square in Oct. 2006 via shankar s. on Flickr, CC BY 2.0)

The Plain Dealer Publishing Co. filed a facial challenge to an ordinance for newspaper vending machine licensing enacted by Lakewood, Ohio. The ordinance required a license from the city to place news racks on public property and gave the mayor the authority to approve or reject the applications.

If an application was denied, the ordinance required the mayor only to provide an explanation; if it was approved, the mayor was authorized to list “terms and conditions deemed necessary and reasonable by the Mayor” to continue the licensing agreement.

The Supreme Court, in a 4-3 decision — Chief Justice William H. Rehnquist and Justice Anthony M. Kennedy did not participate — agreed with the court of appeals, finding the ordinance unconstitutional on its face.

Writing for the Court, Justice William J. Brennan Jr. first declared the Plain Dealer’s facial challenge justified based on “the time tested knowledge that in the area of free expression, a licensing statute placing unbridled discretion in the hands of a government official or agency constitutes prior restraint and may result in censorship.”

The absence of evidence of governmental censorship in this case was not germane: “Self-censorship is immune to an ‘as applied’ challenge, for it derives from the individual’s own actions, not an abuse of government power.” The danger in Lakewood’s licensing scheme was the fear, well founded or unfounded, that a newspaper would be denied rights to news racks if it published stories critical of the city and thus would lead to self-censorship, constituting, in fact, a form of prior restraint.

Circulation of newspapers is protected by the First Amendment

That the ordinance was not directed at the publication of newspapers, but concerned the placement of news racks, is not relevant to the constitutional question.

The Court noted that licensing procedures impinging on such protected conduct can pass constitutional muster, but only with the inclusion of “neutral criteria to insure that the licensing decision is not based on the content or viewpoint of the speech being considered.”

Justice Byron R. White, joined by Justices John Paul Stevens and Sandra Day O’Connor, wrote a dissent focusing on the validity, or scope, of “the peculiar doctrine that governs facial challenges to local laws in the First Amendment.”

They asserted that regulatory or licensing procedures can be challenged on their face, but only if the regulations or licenses deal with “specific conduct” protected by the First Amendment.

In cases involving “conduct commonly associated” with First Amendment rights, the distribution of newspapers via news racks, should be dealt with by as-applied challenges because “placement of news racks on city property is not” specifically protected by the First Amendment.

An ordinance may allow for discretion by a decision maker, but a constitutional challenge should not be permitted unless the actions of that decision maker result in an actual prior restraint of the press. In effect, Plain Dealer had no standing in this case, unless it applied for licensing and suffered censorship as a result. In White’s opinion, the standard announced by the Court was too broad.