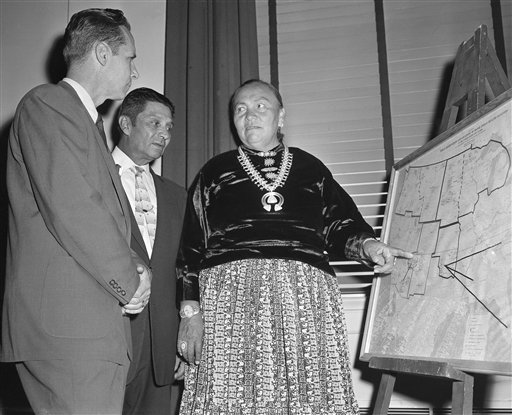 In Bowen v. Roy, 476 U.S. 693 (1986), the Supreme Court ruled 8-1 that the federal government did not violate the free exercise clause of the First Amendment by assigning a Social Security number to Native Americans for welfare benefits. In this photo, Annie Wauneka, right, chairman of the Navajo Tribal Council's health committee, talks with Surgeon General Leroy E. Burney, left, before a closed meeting of the advisory committee on Indian health at the Department of Health, Education and Welfare, Sept. 26, 1956. Looking on at center is Frank Ducheneaux, chairman of the South Dakota Cheyenne River Sioux Tribal Council. (AP Photo/Henry Burroughs, used with permission from the Assoicated Press)

In Bowen v. Roy, 476 U.S. 693 (1986), the Supreme Court ruled 8-1 that the federal government did not violate the free exercise clause of the First Amendment by assigning a Social Security number for welfare benefits.

Steven J. Roy, a Native American, did not want the federal government to use a Social Security number for his daughter to provide her with welfare benefits. According to Roy, the use of the Social Security number would prevent his daughter from “becoming a holy person,” “rob [her] spirit,” and violate the free exercise clause of the First Amendment.

The Supreme Court disagreed with Roy’s contention. Writing on behalf of the Court, Chief Justice Warren E. Burger held that “the Free Exercise Clause . . . does not afford an individual a right to dictate the conduct of the Government’s internal procedures.” Complying with Roy’s religious claim could unilaterally set the terms and conditions of his dealings with the federal government.

Using the valid secular policy test rather than the prevailing strict scrutiny standard of Sherbert v. Verner (1963), Burger reasoned that “the statutory requirement that applicants provide a Social Security number is wholly neutral in religious terms and uniformly applicable” across the more than twenty million people requesting assistance. The Court also concluded that the federal government’s use of the identification numbers had a legitimate purpose of preventing fraudulent activity.

Some thought the government should demonstrate a compelling interest

Both Justices Harry A. Blackmun and Sandra Day O’Connor believed that the Court should have used the strict scrutiny standard, mandating that the federal government demonstrate a compelling government interest and use the least restrictive means.

O’Connor, who concurred in part and dissented in part, further argued that granting an exemption for religious purposes would not hinder the government’s goal of combating fraud.

This case raised an important issue: Was the Supreme Court subjecting Native American claims to a different standard? Or was the Court already moving toward the abandonment of the strict scrutiny standard as evident in its later decision in Employment Division, Department of Human Resources of Oregon v. Smith (1990)?