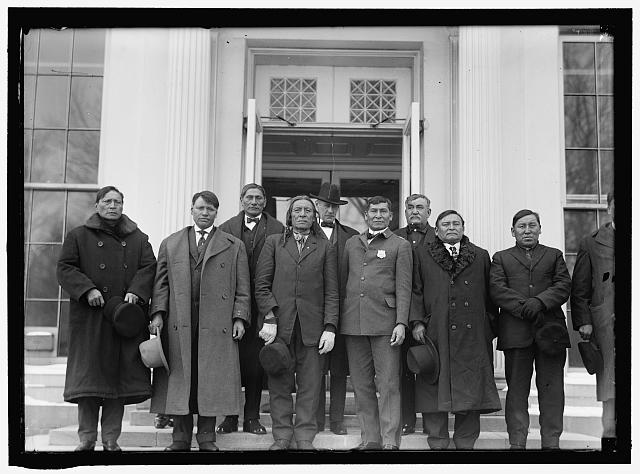 In this 1913 photo, Reuben Quick Bear is pictured in the second row on the right. Quick Bear was a Sioux Native American from South Dakota who was among plaintiffs in a Supreme Court case in which they tried to stop payments treaty trust funds to a religious school on their reservation. Justice Melville Fuller said there were no First Amendment restrictions on using the funds for the religious school, and forbidding the use of the funds would deny the Indians religious liberty rights. (Image via Library of Congress, public domain)

In Quick Bear v. Leupp, 210 U.S. 50 (1908), the Supreme Court unanimously rejected the pleas of Sioux Native Americans of South Dakota who were attempting to stop payments from treaty trust funds for a religious school on the Rosebud Reservation.

The plaintiffs, among them Reuben Quick Bear, sued the commissioner of Indian affairs, Francis E. Leupp, seeking an injunction against payments to the Catholic Indian Bureau, which was running the mission school.

They argued that the payments depleted funds to which the Sioux were entitled and contended that such expenditures were forbidden by several Indian appropriations acts beginning in 1895. The Court ruled that they were not. Further, the court said that the prohibition on government to expend money on religious schools did not apply to treaty funds and to forbid such expenditures would be to violate the free exercise clause of the First Amendment.

Chief Justice Melville Fuller’s decision against Quick Bear distinguished between two types of expenditures: those that came from regular government appropriations and thus were subject to limitations under the Indian appropriations acts and those that were administered by the government from a trust fund created by a treaty to compensate tribes for lands ceded to the United States.

The government held the latter in trust on behalf of the Native Americans. Money from the trust fund was applied to the mission school.

Fuller denied that “the spirit of the Constitution” as embodied in the Indian appropriations acts should disallow Native Americans from using “their own money to educate their children in the schools of their own choice” simply because the government otherwise had to act in an “undenominational” capacity. He indicated that forbidding the Native Americans from expending their funds as they wanted would in fact deny them their free exercise rights. An excerpt from the opinion:

But it is contended that the spirit of the Constitution requires that the declaration of policy that the government "shall make no appropriation whatever for education in any sectarian schools" should be treated as applicable, on the ground that the actions of the United States were to always be undenominational, and that therefore the government can never act in a sectarian capacity, either in the use of its own funds or in that of the funds of others, in respect of which it is a trustee; hence, that even the Sioux Trust Fund cannot be applied for education in Catholic schools, even though the owners of the fund so desire it. But we cannot concede the proposition that Indians cannot be allowed to use their own money to educate their children in the schools of their own choice because the government is necessarily undenominational, as it cannot make any law respecting an establishment of religion or prohibiting the free exercise thereof.