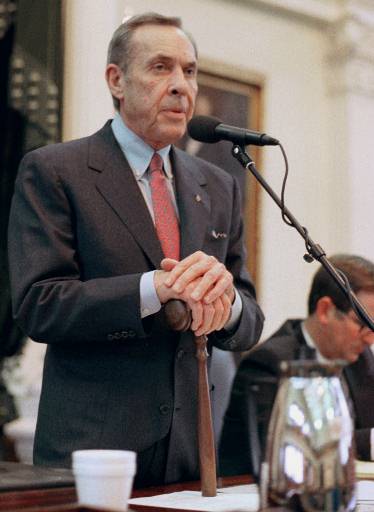 The Supreme Court decision in Texas Monthly, Inc. v. Bullock, 489 U.S. 1 (1989), centered on a Texas law, in force between 1984 and 1987, that exempted solely religious books and periodicals from the state’s sales and use taxes. The Court found that the law constituted a state endorsement of religion in violation of the establishment clause of the First Amendment. Former Texas Comptroller Bob Bullock, defendant in the case, shown in this Feb. 12, 1997 photo in Austin, Texas. AP Photo/Harry Cabluck, used with permission from the Associated Press)

The Supreme Court decision in Texas Monthly, Inc. v. Bullock, 489 U.S. 1 (1989), centered on a Texas law, in force between 1984 and 1987, that exempted solely religious books and periodicals from the state’s sales and use taxes. The Court found that the law constituted a state endorsement of religion in violation of the establishment clause of the First Amendment.

The publishers of Texas Monthly, a general interest magazine that did not qualify for the exemption, sued the state, arguing that the law infringed on the establishment clause by granting favored treatment to publishers of religious materials. The trial court ruled in favor of Texas Monthly; the state’s Third District Court of Appeals reversed, ruling that the law did not violate the Lemon test, established in Lemon v. Kurtzman (1971). Texas Monthly then appealed to the Supreme Court, which ruled for the publishers.

In the controlling opinion, Justice William J. Brennan Jr. reasoned the state of Texas is free to grant tax exemptions to charitable organizations and, in so doing, may include religious groups. However, the Texas law applied only to publications promoting religion and, therefore, amounted to an implied state endorsement of religion. Furthermore, granting a tax exemption solely to a religious group equates to a state subsidy of religion and forces all taxpayers, regardless of their beliefs, to become “indirect and vicarious donors” to the group. Texas could have saved the law by defining a secular goal and then expanding the exemption to cover all groups, religious and secular, that would contribute to it. This, however, Texas had not done.

In defending the law, Texas had argued that both the free exercise clause and the establishment clause required the state to grant the tax exemption: the former because charging the tax interfered with the ability to practice religion by spreading one’s beliefs, and the latter by forcing the state to interfere with religious groups to enforce the tax. The Court rejected both arguments.

Court said tax was not an actual burden on religion

With regard to the free exercise claim, the Court held that a state did not have to grant an exemption to a law unless that law constituted an actual burden on a group’s ability to practice its religion. In this case, there was no evidence that the sales tax created such a burden.

With regard to the establishment claim, the Court acknowledged that collection of the tax might indeed create some entanglement between religion and the state; however, the Texas law, by forcing the state to determine who would qualify for the exemption, put Texas in the position of weighing the merits of religious claims, an even greater entanglement.

Justice Byron R. White filed a concurring opinion arguing that because the Texas statute taxed periodicals differently based on their content, it fell afoul of the free press clause. Justice Antonin Scalia dissented on the grounds that the decision was inconsistent with past precedents and historical traditions.