By John R. Vile
Other articles in Governmental Entities and Activities 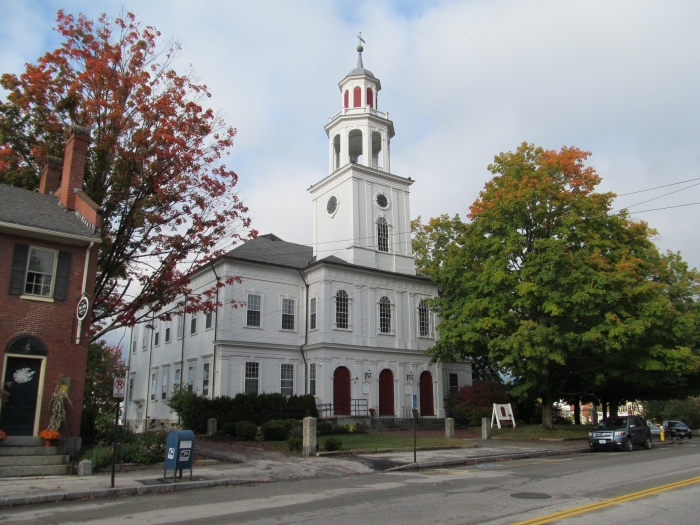 When the First Amendment was ratified in 1791, the establishment clause prohibited a national church. But established churches still existed in many states. For example, the Congregational Church was established by early Puritans in New Hampshire, Connecticut and Massachusetts, a structure those states retained until the 1800s. (Congregational Church in Exeter, New Hamphshire, dating to 1638 by John Phelan, CC BY-SA 3.0)

Although the establishment clause of the First Amendment clearly prohibits the creation of a national church, when the amendment was ratified in 1791 it did not eliminate established churches in those states where they still existed; indeed, it would have encountered opposition in those states if it had sought to do so.

Puritans and others came to the New World in search of religious freedom. Some of these very groups, however, sought to persecute others in order to further their own religions. Puritans persecuted Quakers and perceived heretics in Massachusetts; Roger Williams fled from Massachusetts in order to practice his religion in Rhode Island; and Baptists generally opposed establishments, although, with other opponents of specific establishments, they sometimes took it for granted that schools and other public institutions would reflect general Protestant sentiments.

Congregationalism generally prevailed in the New England states, whereas the Church of England (Episcopal) generally prevailed in the Southern states (and in time usurped the Dutch Reformed Church in New York), and Quakers and their allies were prominent in the middle states. Although Maryland was originally founded in part to provide religious freedom for Roman Catholics, it eventually established the Episcopal Church.

Establishment generally meant that government provided direct aid to the church. Many colonies and early state constitutions also required officeholders or voters to take an oath stating that they adhered to the major tenets of the established faith. In 1787 the authors of Article 6 of the U.S. Constitution specifically precluded such test oaths as a condition for national office.

The First Great Awakening in the 1730s and 1740s increased religious diversity, and the American Revolution furthered the impetus of Southern states to drop their affiliations with the Church of England, which most did between 1776 and 1790. The Second Great Awakening, which occurred after 1800 and created further religious diversity, led to another wave of disestablishments (Noll and Harlow 2007:29).

New Hampshire kept its establishment until 1817; Connecticut kept its establishment until 1818; and Massachusetts did not abandon its state support for Congregationalism until 1833 (Kidd 1999: 1021). Between 1776 and 1796, however, in attempts to prevent undue clerical influence on state politics, seven states adopted constitutional provisions that excluded ministers from public office (Kidd 1999:1019).

One of the most public efforts to disestablish the church took place in Virginia. Thomas Jefferson introduced the Virginia Statute for Religious Freedom, which James Madison succeeded in getting adopted in 1786. As a state legislator, Madison beat back an attempt supported by Gov. Patrick Henry to provide tax money to pay for the salaries of religious teachers, a mild form of establishment, which might otherwise have prevailed.

Concern about the distance between the Church of Jesus Christ of Latter-day Saints and the state in Utah delayed the state’s entry into the Union until the end of the 19th century.

14th Amendment applied prohibition on established churches to the states

Despite the provision in Article VI of the Constitution of 1787 prohibiting religious oaths as a condition for national office, from time to time individuals still indicate their reluctance to elect individuals from nonmainstream, or non-Protestant, faiths.

John F. Kennedy became the first Roman Catholic to be elected as a U.S. president in 1960; Mitt Romney, a Mormon who sought the Republican presidential nomination in 2008, encountered some opposition because of his faith.