By Michael W. Hail
Other articles in Governmental Entities and Activities 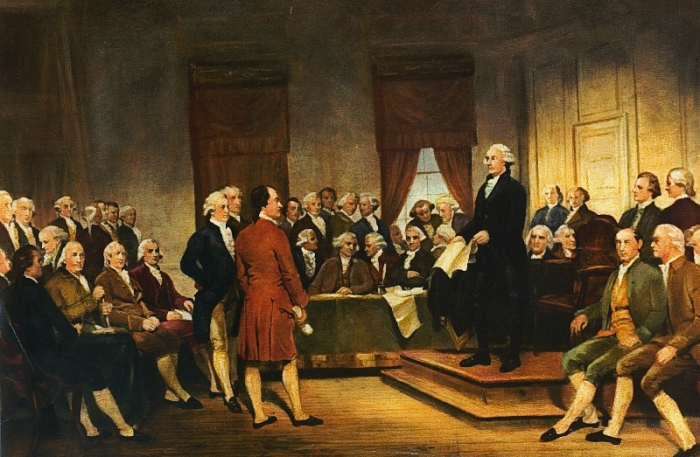 Federalism is the theory of distributing power between national and state governments. The relation between federalism and the First Amendment has important dimensions involving political theory. Modern federalism was created at the Constitutional Convention of 1787, pictured here. (Painting of George Washington at Constitutional Convention of 1787 by American painter Junius Brutus Stearns via Wikimedia Commons, public domain).

In the United States, the organizing principle of federalism distributes power between the national government and the state governments, both of whose powers rest on written constitutions and both of which can act directly on individuals. This governmental system ensures cooperation and conflict within and between levels of government.

Relationship between federalism and the First Amendment has three dimensions

The relationship between federalism and the First Amendment has three important dimensions:

Founders saw Bill of Rights as an afterthought

The founders were divided on whether there should be a bill of rights. In fact, the Constitutional Convention of 1787 completed its work without including any such explication of rights, though delegates had considered and subsequently rejected the enumeration of rights. According to historian Gordon Wood (1969), delegate “George Mason, almost as an afterthought in the last days of the convention, brought the issue up, . . . [and subsequently] it was defeated by every state” (p.536).

Although the ratification debates produced a compromise between the leading Federalists such as James Madison and the Anti-Federalists, other Federalists such as Roger Sherman, the author of the Connecticut Compromise that created modern American federalism, remained opposed to a bill of rights as unnecessary. Even after the Constitution was ratified and the first 10 amendments were added, a natural rights understanding informed the founders’ views of the Constitution.

As political scientist James Burnham (1959) observed, “These rights, in short, are limits, not powers” (p. 87). Thus the constitutional theory of the founders was premised upon limitations to the powers of the federal government as reflected in the Bill of Rights.

Initially, the founders interpreted the First Amendment, and indeed the entire Bill of Rights, as limiting only the powers of the national government rather than those of the states. Indeed, it was not until the Supreme Court ruled in Gitlow v. New York (1925) that the Court began a systematic application of the Bill of Rights to the states and other subnational governments through a judicially constructed due process understanding of rights protected by the Fourteenth Amendment, which was ratified after the Civil War in 1868.

But states had constitutions, statutes, and common law practices that predated the First Amendment and provided a broad area in which states could address policy in areas prohibited to the national government and could protect individual liberties from government interference.

“The first constitutions represented only the initial phase in the development of civil rights in the United States,” remarked constitutional historian Willi Paul Adams (2001),“. . . [and] the codification and application of civil rights were part of a political process that had a promising beginning under the favorable conditions of the founding” (p.144).

State constitutions had their own enumerations of rights

As political scientist George Anastaplo (1995) has noted, “The American people were already exercising [these rights] by 1789, whether or not their States had bills of rights or guarantees in them of freedom of speech or of the press. These were rights that were confirmed, not created, by the speech, press, assembly, and petition provisions of the First Amendment”(p.53).

As the Union grew during the two centuries after the founding, state constitutions increasingly included enumerations of rights. Even today, some states are more active than the national government in protecting individual rights.

For example, at the national level the right to privacy is derived from implications in the First, Third, Fourth, Fifth, Ninth, and 14th Amendments. By contrast, half the states have enumerated constitutionally or by statute an explicit, and typically broader, right to privacy. Federalism gives the states latitude to experiment with policy areas under the First Amendment that it does not give to the national government, even though the latter retains an important role.

Daniel J. Elazar (1987) and other federalism scholars have observed that the states serve as laboratories for policy experimentation and for addressing the often unique needs arising from local and regional diversity.

Even after a century of nationalizing policy authority, the states play a significant, meaningful, and constitutionally guaranteed role in the intergovernmental policy process that both affirms and extends the rights and limitations in the First Amendment and Bill of Rights.